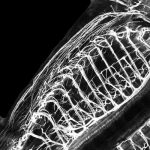 In a surprising and unexpected discovery, scientists at NYU Langone Medical Center have found that a single type of gene acts as a master organizer of motor neurons in the spinal cord. The finding, published in the September 9, 2010 issue of Neuron, could help scientists develop new treatments for diseases such as Lou Gehrig’s disease or spinal cord injury.

The “master organizer” is a member of the Hox family of genes, best known for controlling the overall pattern of body development. By orchestrating a cascade of gene expression in the early embryo, Hox genes allow for the creation of an animal’s overall structure and body part orientation. Scientists first discovered the genes in fruit flies but they have since detected Hox activity in mammals. Humans harbor 39 such genes and 21 have been identified as coordinating motor neurons in the spinal cord.

“We knew that there were 21 Hox genes that determine how connections are made between motor neurons in the spinal cord and muscles in the limbs,” says Jeremy S. Dasen, PhD, an associate professor in the Departments of Physiology and Neuroscience at NYU Langone Medical Center and a Howard Hughes Medical Institute Early Career Scientist. “But what was surprising to us in this study was that a single Hox gene acts as a global organizer of motor neurons and their connections. The next step will be to see how Hoxc9 in motor neurons affect motor behaviors such as walking and breathing.”

In mammals, many hundreds of motor neurons are needed to control the variety of muscle cells used to coordinate movement. Proper function depends on each of these neurons in the embryo finding its way from the spinal cord to the group of muscles that it is equipped to control. Dr. Dasen and his colleagues have been working to discover the blueprint for this motor neuron diversity.

For this study, scientists studied mice with a mutation in Hoxc9 gene. They analyzed the molecular markers that distinguished between motor neurons in the limb and thoracic area and discovered mutation of Hoxc9 transformed the thoracic motor neurons into limb motor neurons. In a series of biochemical experiments they further showed that Hoxc9 orchestrates gene expression in motor neurons by repressing the Hox genes dedicated to limb coordination.

“What we are trying to understand is how the nervous system is wired to control movements such as breathing and walking and see how genetic programs can further control these circuits in terms of exploring this paradigm as a way at looking at the vital circuits of the body,” adds Dr. Dasen.