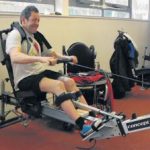 Mr Farrow, 45, is paralysed from the chest down but is using a specially adapted Concept 2 rowing machine.

Straps are put over his shoulders to keep himself upright and electrodes attached to his legs which send an electric current to make his paralysed muscles contract.Mr Farrow, who lives off Pans Lane, is one of about five people with a spinal cord injury who is taking part in the study at Brunel University in London, one of only four such studies worldwide. The others are in Japan, Toronto and Boston.

The aim of the study is to see the effect of intense exercise on people with spinal cord injuries.

Mr Farrow was left paralysed from the chest down after he fell from a tree in his sister’s garden near Salisbury three years ago. He spent 14 months in the spinal unit at Salisbury District Hospital.

Mr Farrow, who has two children, said: “I used to do a lot of sport before my injury but intense exercise is much harder when you’re in a wheelchair. With the lack of exercise there’s a far greater risk of contracting heart disease.

“The rowing programme at Brunel is an exciting study that could have a real impact on the long-term health of not just people with spinal cord injury but anyone with mobility difficulties.

“As far as I can tell, the rowing will increase the capacity of my lungs, stamina and fitness.”

Mr Farrow travels to Brunel three days a week to row. In each session he rows four kilometres which takes about half an hour.

Mr Farrow used to row before his injury. Since his injury he cycles, swims, sails and skis.

He said: “The rowing is hard but the feeling at the end of it is fantastic.

“It’s amazing to be part of a study that is so ground breaking. One of the longer term outcomes is to get the rowing machine registered as a sporting or medical device in gyms.”

Mr Farrow will be rowing 100 kilometres in total over eight weeks. He began two weeks ago.

He wants to raise money for the Back-Up Trust charity, which works with people who have a spinal cord injury. It runs courses in skiing, drama, scuba diving and others.

Mr Farrow is a mentor with the charity helping people who are newly injured.

To sponsor him go to www.justgiving.com/andrewfarrow