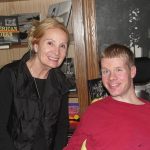 How a Capuchin monkey aids the life of a 27-year-old Concord man and his big family.

Ned Sullivan is taking it one day at a time these days. He’s living at home with his brothers and sisters, dogs, parents, and Kasey, his service monkey.

Sullivan’s mother, Ellen Rogers, spoke at the Concord Bookshop on Sunday about the journey from Ned’s horrifying car accident in Arizona to maintaining a mostly normal life with the help of Kasey who was donated to the family by Helping Hands, a Boston nonprofit.

Rogers has written a book, “Kasey to the Rescue” that is available at the bookshop and elsewhere.

Kasey became eligible for service after she graduated from monkey college, Ellen said. She said the college in Boston is the only one of its kind in the country.

Rogers’ story is that of a normal loving family that has been forced through a gauntlet of the worst kind, ever since “that phone call,” she said, that changed their lives.

Ned, then 22, was a student at the University of Arizona in Tucson when he was paralyzed from the neck down and suffered a brain injury in the accident. He was stabilized by doctors in Tucson, and Ellen was told to “take him home.” Ned was airlifted to Massachusetts General Hospital then to rehab in Atlanta, Ga. at a facility that specializes in spinal cord injuries like Ned’s.

Ned can move his head, shoulders, arms and hands and talk, but he is otherwise confined to a motorized wheelchair. He learned many new life skills at the Shepherd Center in Atlanta, as Ellen said she and the family began to recognize how different their lives would be.

“It was shocking,” she said. “There was physical therapy, occupational therapy, classes for me,” and an endless succession of meetings with doctors and nurses about Ned’s future.

Ellen declined to read from her book at the talk because she said it was too emotional, and even after wading into the emotional impact of the story, it was an effort to maintain her composure.

“At the Shepherd Center, it wasn’t that we were saving Ned’s life, we were getting on with Ned’s life,” she said.

Ellen said she was researching online one day and up popped an email from the Concord Middle School, where one of Ned’s sisters went, about attending a program with Helping Hands, the service that donates monkeys to assist the disabled.

“I couldn’t believe it,” she said. “It was like a miracle. How did this happen?”

Thus began the “long process of getting a monkey,” she said. It took four to five years for Kasey to be eligible after she graduated from the monkey college in Brighton. The family chose a monkey rather than a service dog because they have a couple of dogs already. Besides, Ellen said, with Kasey’s opposable thumbs on four limbs, she can perform more intricate tasks than a service dog could.

“She has been a Godsend,” said Ellen of Kasey. The monkey lives in a large cage and stays indoors most of the time. She was not at the talk because Ellen said crowds and noise can upset her.

Ned said it took a couple of years for the man-animal bond to “intensify.”

“Like with anything else, you meet each other halfway,” said Ned, dressed in a red T-shirt, red fleece jacket and sweat pants. He is a talkative and friendly fellow who responded to questions for about 45 minutes. He signed books of his own, as well as his mother, and sipped water at times during the presentation.

“She is quite a roommate,” said Ned to the delight of the crowd that clustered around his wheelchair. “She lives in a bunch of chaos with the dogs and our family, and she gets along.”

Ned particularly likes the new Willard School where he can go for walks. He said the halls are wide and clean and easy to navigate.

“It is so accessible,” he said, unlike some of the stores he would love to frequent, but can’t because the sidewalks and doorways are not particularly forgiving.

Ned said Kasey has a “dexterity and self-awareness” that make her an ideal helper.

“She is astute to her surroundings,” he said, and performs tasks such as changing a CD or turning the lights or the TV on or off. Kasey is attuned to Ned so that the young man has only to make a sound and point and the monkey will see what needs doing. There is a mini-fridge in the room the family made for Ned, and Kasey can open it and bring Ned some food.

“We thrive on each other,” said Ned. “She makes me laugh all the time.”

Ellen said Kasey is “very curious” and she had to essentially baby-proof the house so that the animal couldn’t access the cabinets and drawers.

Kasey is originally from Argentina, Ellen said. Helping Hands will place its 150th monkey very soon with a disabled individual. Ellen said Kasey “knows” about 100 words and makes her own sounds that the Rogers family can interpret.

Looking down the road is something Ned doesn’t spend time on. He prefers to take things one day or one week at a time. He may want to return to the Shepherd Center to learn new skills “to smooth things out.”

Ekso GT™ Robotic Exoskeleton Cleared by FDA for Use With Stroke...