Patients rave about spinal-cord therapy, but insurance won’t cover it 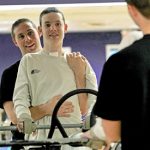 Families of two paralyzed Bay State teens are calling on insurance companies to step up and fund the life-altering therapy that they say has given their sons new hope, but is painfully out of grasp for so many other families.

“It is a shame that insurance doesn’t cover it,” said Michael Brown, who uses donations from the community to pay the $100-an-hour bill for his son, paralyzed Norwood hockey player Matt Brown, to get therapy at Journey Forward, a Canton rehabilitation center.

Brown is among 37 spinal-cord injury patients who are making strides at the nonprofit center founded in 2008 by Dan Cummings, a quadriplegic who was paralyzed in 2000 and told he’d never walk again.

“What we do at Journey Forward is we think outside the box,” said Cummings, 29, who gets around with a walker and says exercise-based therapy has made that possible. “We get paralyzed clients on spin bikes, on total gyms, on treadmills.”

Cummings operates on the belief that with repetitive exercise the neuropathways that are broken in a spinal-cord injury can be retrained, forging connections again between the brain and the spinal cord.

Brown, 16, the high school hockey player who suffered two fractured vertebrae in a game last January, leaving him a quadriplegic, is wiggling his toes now thanks to his work at Journey Forward, he said.

“I’ve got three of them to really go,” he said of the toes on his right foot.

Insurance companies say they don’t cover Journey Forward because their therapies are unproven and their specialists are not licensed physical therapists, but families of patients say that view is shortsighted.

“To put up a barrier to anybody who has suffered a spinal-cord injury or is in a wheelchair and is looking to get out, to put out a financial barrier because insurance doesn’t see it as traditional is just crazy,” said Michael Brown. “There are many of these clients who don’t want to learn how to live in a wheelchair. They want to learn how to get out of that chair.”

Many clients rely on fund raising to pay, Cummings said.

Journey Forward was becoming out of reach for LaNyia Johnson, 17, a paraplegic who was the innocent victim of a 2007 Worcester shooting. His insurance company, Fallon Community Health Plan, does not cover Journey Forward.

“All the fund raising we did, it just didn’t pan out to $1,600 a month,” said Johnson’s mother, Marcy Johnson, who is the primary breadwinner for the family and raising three kids. “I’m making homemade lollipops and doing craft fairs and pizza things and breakfast things and I just can’t get anybody to come.”

The Johnsons are relying on the Ray Tye Medical Aid Foundation to pay the $25,000-a-year cost.

“It would be heartbreaking if he didn’t have us and he just used up the resources the family had and just had to quit and sit in that wheelchair and twiddle his thumbs for the rest of his life,” said Eileen Tye, who took over the foundation for her late husband, Ray Tye.

“What we’re seeing in this organization is some very interesting anecdotal information that looks good, but there isn’t any evidence base for this,” he said.

He said insurance covers services that are similar.

“There’s a tremendous amount of traditional physical therapy that is exercise,” he said.

Spokespeople for Harvard Pilgrim and Fallon did not respond to e-mails and calls seeking comment. Other insurance companies echoed Minkoff.

“While physicians may value exercise for those with spinal-cord injuries, these services are not provided by licensed physicians and physical therapists, therefore they are not considered medical services covered under Blue Cross Blue Shield of Massachusetts’ medical plans,” said John Fallon, senior vice president and chief physician executive at Blue Cross.

Susan Howley, director of research at the Christopher and Dana Reeve Foundation, said the exercises used at Journey Forward are based on years of scientific research.

“Through certain kinds of repetitive exercise you can give the brain and the spinal cord the information they need to reorganize after they’ve been damaged,” she said. “Journey Forward is giving its clients an opportunity to do these kinds of activities-based exercise.”