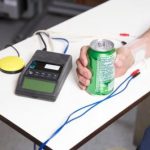 “This study proves that by stimulating peripheral nerves and muscles, you can actually ‘retrain’ the brain,” says the study’s lead author, Dr. Milos R. Popovic, a Senior Scientist at Toronto Rehab and head of the hospital’s Neural Engineering and Therapeutics Team. “A few years ago, we did not believe this was possible.”

Study participants who received the stimulation therapy also saw big improvements in their independence and ability to perform everyday activities such as dressing and eating, says Dr. Popovic. “This has real implications for people’s quality of life and independence, and for their caregivers.”

Unlike permanent FES systems, the one designed by Dr. Popovic and colleagues is for short-term treatment. The therapist uses the stimulator to make muscles move in a patient’s limb. The idea is that after many repetitions, the nervous system can ‘relearn’ the motion and eventually activate the muscles on its own, without the device.

The randomized trial, the first of its kind, involved 24 rehabilitation inpatients who could not grasp objects or perform many activities of daily living. All received conventional occupational therapy five days per week for eight weeks. However, one group (9 people) also received an hour of FES therapy daily, while another group (12 people) had an additional hour of conventional occupational therapy only. (Three patients did not complete the trial.)

Comparisons between the functional abilities of the two groups showed that stimulation therapy “significantly reduced disability and improved voluntary grasping beyond the effects of considerable conventional upper extremity therapy in individuals with tetraplegia,” the authors write.

Dr. Popovic notes that patients who received only occupational therapy saw a “gentle improvement” in their grasping ability, but the level of improvement achieved with FES therapy was at least three times greater using the Spinal Cord Independence Measure, which evaluates degree of disability in patients with spinal cord injury.

A biomedical engineer, Dr. Popovic holds the Toronto Rehabilitation Institute Chair in Spinal Cord Injury Research. He is also a professor in the Institute of Biomaterials and Biomedical Engineering at the University of Toronto.

Based on their findings, the study’s authors recommend that stimulation therapy should be part of the therapeutic process for people with incomplete spinal cord injuries whose hand function is impaired. Dr. Popovic’s team is working to make this a reality. They have almost completed a prototype of their stimulator, but need financial support to take it forward. Dr. Popovic thinks the device could be available to hospitals within a year of being funded.

“FES (stimulation therapy) has the potential to have a significant and positive impact on the lives of individuals living with the devastating results of spinal cord injury,” says Dr. Anthony Burns, Medical Director of Toronto Rehab’s spinal cord rehabilitation program. Calling the trial “groundbreaking,” Dr. Burns says he will work with Dr. Popovic “to make this intervention available to our patients, and to answer important questions such as the duration of the effect.”

One limitation of the study is that the research team could not get all participants to take part in a six-month follow-up assessment. However, six individuals who received FES therapy were assessed six months after the study. All had better hand function after six months than on the day they were discharged from the study.

Administering stimulation therapy is easy and cost-effective, says Dr. Popovic, who stresses that it should augment, and not replace, existing occupational therapy.