Riding a bike with her hands 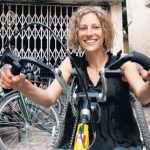 Canadian Morgan Van Breda is cycling from Delhi to Kanyakumari to raise awareness about spinal cord injury, and funds for her own treatment

Thirty two year-old Morgan Van Breda is cycling across India — with her hands. The ambitious young Canadian was only 24 when a soccer post collapsed on her back while she was in Cuba, turning her into a paraplegic.

Now, she is on a 3,900 km, seven-week journey from Agra to Kanyakumari on a handcyle, raising awareness about spinal cord injury, and funds for breakthrough stem cell research that may allow her to walk again.

The mission is an initiative of The Able Project, an organization built by Breda and Erik Zaremba, a documentary filmmaker. Breda is documenting her experiences on her blog (http://morgansride.com/).

Travelling with Tour d’Afrique, and along with 30 other cyclists, Breda is the only athlete on a handcycle. Having reached Mumbai on Saturday, she has hit the half-way point, and is rejoicing. “It’s so beautiful here. I love it. I am really enjoying it. The reactions from people, the smiles I receive, it opens my heart,” she said.

Breda will spend the day in the city but resting isn’t exactly her style. She will be guest of honour at a ceremony in Saki Naka to donate 42 handcycles to paraplegics in Mumbai, funded by Tour d’Afrique.

Breda is not only focused on her own recovery, she is also out to fulfill her personal mandate and that of The Able Project: to heal and be healed. “I’m excited for the recipients of the bikes. I think it will show them that someone cares, give them a sense of freedom, and hopefully open up employment opportunities.”

The Able Project expects this to be one of many initiatives to raise awareness about spinal cord injury.
Breda, and her fellow cyclists are expecting to reach Kanyakumari on March 20. Following this trek, and after raising funds needed for her treatment, she will return to Delhi where she intends to spend two months under the care of Dr Geeta Shroff who is gaining international recognition for her groundbreaking work in stem cell treatment. Dr Shroff has had success with patients of spinal cord injuries and cerebral palsy.