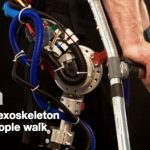 PENSACOLA, Fla., April 5, 2011 — Today, Dr. Kenneth Ford, Director and CEO of the Florida Institute for Human & Machine Cognition (IHMC), joined institute researchers to unveil Mina, a robotic exoskeleton developed to restore ambulation for individuals afflicted with paraplegia, hemiplegia, paresis, asthenia, and functional muscle loss. Developed by the IHMC robotics team led by Dr. Peter Neuhaus and Dr. Jerry Pratt, Mina acts as a pair of robotic legs that assist people, who have lost their ability to walk, in regaining upright mobility when outfitted with the device. Future applications of Mina are envisioned to span from rehabilitating those with stroke and spinal cord injuries, to augmenting human strength capabilities when operating in complex mobility environments.

“At IHMC, our scientists continually strive to invent and develop technologies that will make a truly meaningful contribution to mankind, and Mina is no exception,” said Dr. Kenneth Ford. “Tests of Mina have shown remarkable results in enabling upright mobility among those who have lost independent leg function, and the applications of the device are both widespread and profound. I am proud to be able to announce this important technology, and commend the IHMC team for their extraordinary vision and work to bring this idea to reality.”

Mina joins a growing list of technologies and innovations developed by the IHMC robotics team including humanoid robots that can walk and balance while being pushed, reconfigurable dynamically balancing robots, and algorithms for quadrupedal robots that can walk over very rough terrain.

“In Florida, we have made the quest to lead in applied research and technology a legislative priority,” said State Senator Don Gaetz. “The fact that the IHMC has stepped up to answer this charge through the development of the extraordinary Mina device is gratifying and shows that Northwest Florida is an absolute technology contender in our state and nation.”

The IHMC MINA Exoskeleton has been under development for several years by Peter Neuhaus, Jerry Pratt, and IHMC researchers Jerryll Noorden, Travis Craig, Tec Torres, Justin Kirschbaum, David Lecoutre, Ionut Olaru, John Taylor, and Matt Bellman. Currently in its Phase II prototype form, Mina has been subjected to an extensive array of onsite evaluations. Most recently, operational evaluation involved two individuals with complete spinal cord injury (T10 and T12 vertebrae) who are unable to walk. Within hours of training with the IHMC team on the use of the Mina, both individuals were able to walk independently with only forearm crutches support. For both, this was the first experience of walking upright since becoming paralyzed. During testing, one of the paraplegic evaluators commented: “What I want is to be able to reintegrate back into the walking society because we are not rolling creatures. The exoskeleton [Mina] will bring me back to what humans are … we’re walking creatures.”

Comfortably secured to the individual with leg, waist, and shoulder attachments, Mina utilizes computer-controlled motors at the hips and knees to move the user’s legs while the user provides balance with a pair of forearm crutches. Future versions of the device will include advanced user interfaces and untethered operation. Other next-generation versions of Mina are expected to address mobility over varied terrains, as well as application for rehabilitating those with stroke and spinal cord injuries.

“Mina is a phenomenal development with the potential to significantly improve the lives of individuals with limited mobility,” said Congressman Jeff Miller, whose 1st Congressional District includes the Northwest Florida district where Mina was developed. “Generally, it is hard to describe just how exciting innovations such as Mina can be given their fundamental impact on enhancing the quality of life for so many people. I am thrilled that Mina was researched and developed at IHMC, and that it will contribute to the overall technology base found in Florida.”

Established in 2004 as a statewide not-for-profit research institute by the Florida Legislature, the IHMC is home to over 100 top scientists and researchers from across the globe collaboratively engaged in cutting-edge developments in the fields of artificial intelligence, robotics, multi-modal interfaces, human-centered computing, cyber security, machine learning and data mining, knowledge modeling, cognitive psychology, etc. IHMC has earned global recognition for excellence in research and technology. In 2007, the U.S. Department of Commerce recognized IHMC with its prestigious national award for Excellence in Technology Driven Economic Development.

For more information on the Mina or the IHMC, contact Julie Sheppard at (850) 202-4435 or go to website http://www.ihmc.us. A video of IHMC’s Mina can be viewed at the following link: http://www.ihmc.us/research/mina/Mina.php