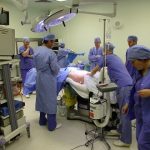 A new approach to nerve repair has restored breathing to rats with spinal cord injury.

Scientists believe the same technique could help human patients who have to rely on ventilators, leaving them vulnerable to dangerous infections.

The researchers used a section of peripheral nerve to “bridge” a break in the spinal cord which had paralysed half the diaphragm, the sheet-like muscle that enables breathing.

A bacterial enzyme was then used to drill tunnels through the scar tissue at the injury site, allowing neurons to grow.

“All the nerves hook up with inter-neurons and somehow unwanted activities are filtered out, but signals for breathing come through,” said Prof Silver. “The spinal cord is smart.”

After three months, 80% to 100% of breathing function had been restored, the scientists reported in the journal Nature.