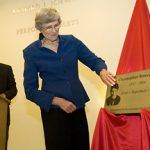 Those three words adorn the plaque dedicated to Christopher Reeve that was unveiled Saturday at Cornell University. The dedication came in conjunction with the announcement of a scholarship created in Reeve’s honor, organized by his Class of 1974 classmates.

Best known for his role in the 1978 film “Superman,” Reeve was driven by a love of the craft, a passion that blossomed during his three years at Cornell. That same drive was visible later in his life when he struggled to come to terms with a 1995 spinal cord injury that left him a quadriplegic.
Helen Bendix, a friend of Reeve since their days at Cornell, noted the consistency of character that carried him through his life.

“The charm, the talent, the intelligence, he was all of that before. He never changed, people just became able to see him better,” she said.

Also in attendance Saturday was Barbara Johnson, Reeve’s mother. Clearly touched by the sentiments shared by the Cornell community, Johnson spoke fondly of remembering her son as the self-reliant young man he was while at Cornell.

“It’s been like coming on a pilgrimage for me,” she said.

In visiting Cornell, Johnson was walking across a campus that had been inhabited not only by her son, but also by her father. A 1916 graduate who also got his law degree at Cornell, Johnson’s father exhibited a drive she said she suspected her son had inherited.

“This is where both of them were formed in a way,” she said.

For Bendix, being back on campus reminded her of memories of the 6-foot-4-inch Reeve striding across the arts Quad, his navy pea coat trailing behind him. Often he would be heading to Risley Hall for his next theater-related event.

“He loved the theater here and appreciated the opportunities they gave him,” Bendix said. “They gave him challenging roles and didn’t just cast him as a pretty boy.”

Reeve considered theater the highest form of acting and performed in more than 150 plays during his career. His first big break came in 1976 when he performed on Broadway opposite Katherine Hepburn in “A Matter of Gravity.” That opportunity followed close on the heels of his year of study at Julliard, where he matriculated after three years at Cornell.

The energy with which he approached acting and early activism interests like the Environment was evident throughout his life, particularly as he worked to advocate for more research and funding for the study of spinal cord injuries and paralysis. He lost the use of his limbs and relied on a respirator following a 1995 equestrian accident where he went over the head of a horse and fractured two Vertebrae in his neck. In 1999, the Christopher Reeve Foundation was formed and since then has raised money for the cause while providing quality of life services for those affected by paralysis.

“He achieved more between 1995 and his death in 2004 than many of us achieve in a lifetime of excellent health,” Cornell Provost Biddy Martin said.

In his memory, fellow members of the class of 1974 created a scholarship that will support students majoring in theater, film, music or English. So far, $50,000 has been raised and donations are still being collected.

The plaque, also a gift of the Class of 1974, will be placed in the lobby of the Schwartz Center for the Performing Arts. As David Feldshuh, director of the center, noted, “Seeing that plaque, students will learn that hard challenges are often the opportunity for great achievements.”

People are more than their wheelchair’; Speaker shares experiences with school...

Young, disabled and stuck in a nursing home for the elderly