Bionic bodies: From typing with a glance to restoring paralyzed limbs, new technology aids the ailing 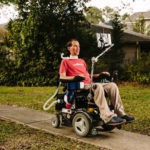 If eye-gaze technology, motion sensor tracking and functional electrical stimulation sound like secret weapons of the CIA, you’d be half right. Much of the newfangled equipment in use for those with medical disabilities came out of technology originally designed for the government. Now, it’s helping injured and ill people with life’s basic needs.

Former Saints player Steve Gleason, diagnosed with ALS in 2011, propels his custom wheelchair with only a glance.

“I have an infrared eye tracker that is connected to my laptop and serves as my control center,” said Gleason. The chair is aided by the Microsoft Enable team and sophisticated eye-tracking technology, he said. “This combination of technology allows me to type, speak and navigate a computer just as you would. I can text, tweet, even pull up any song I want on Spotify. I’m able to participate in conference calls, help run our foundation and handle lunch duty at my son’s school. At home, we have an automation program, so I’m able to control TVs, lights, doors, blinds, the thermostat and fans. I’m even able to drive my wheelchair with my eyes.”

“Steve’s particular system uses eye-gaze technology,” said Anders Mathisen, global product manager for Tobii Dynavox, which invented Gleason’s system. “HD cameras illuminate his face, and we use near infrared light to specifically illuminate his eyeballs, which gives us a good 3-D representation of his eye.”

Advanced algorithms interpret the image stream generated by the sensors, so the system knows precisely where Gleason is looking, right down to a specific key on the keyboard. Thanks to the system, Gleason types 20 words a minute.

Technology is everywhere in the world of health care, but perhaps nowhere is it more prevalent than in the rehabilitation of spinal cord injury patients. With the use of electrode stimulation, before muscles atrophy, many patients are relearning to walk.

For Morgan City resident Quinn Toups, a simple jump into a pool was the beginning of a life-altering event.

“I somehow twisted in the air and hit my head on the bottom,” said Toups. “I was flipped onto my stomach, couldn’t move and was drowning. Thank God my 6-year-old was in the pool with me. She flipped me over and yelled to my wife, who called 911. I was unconscious by the time the paramedics arrived as I had taken in so much water.”

Paralyzed from the shoulders down, he was diagnosed with what’s known as an incomplete C4 injury. Many of these midcervical injuries can be rehabilitated in time, but progress varies with the injury. Toups is now far from home at Touro Infirmary in New Orleans, where he is undergoing the latest in physical therapy at the specialty spine injury unit. Quick access to state-of-the-art care maximizes any potential return of function.

“Quinn is using the ERIGO PRO,” said Joshua Berthelot, PT, program supervisor for the Spinal Cord Injury Unit at Touro. “It’s a tilt table, which allows us to get him upright easily, strap his feet into stair steppers, and with the use of functional electrical stimulation, we jolt his muscle groups, taking a patient with no ability to move his lower limbs into a stair-stepping pattern. This stimulates the precise muscles he needs to walk or climb.”

Being upright and moving is also critical to maintaining normal blood pressure, as well as organ function. That’s why patient Michael Causey, the victim of a gunshot to his head that left him with no use of his right side, is harnessed into the ARETECH Zero G, a type of very sophisticated traction device.

Without gravity dragging him down and thanks to specific electrical muscle stimulation, this patient has a good chance of walking again, said therapists at Touro.

Advanced medical technology also is being used to solve problems for people with cognitive issues, such as dementia. For example, Alzheimer’s patients can become severely disoriented and often get lost.

“We know that those with Alzheimer’s have developed plaque in their deep brain tissue,” said Cathi Fontenot, M.D., professor of clinical medicine at LSU’s School of Medicine. “The neurotransmitters in the brain, which direct their bodies, are short-circuited, if you will, so the patients may look at an empty coffee cup, think they want to go get coffee, then forget why they left the house shortly after they leave.”

But this recipe for disaster is being remedied with the aid of GPS sole trackers put into the patient’s shoes. Caregivers can monitor their every move with location data sent every five minutes through texts to a caregiver’s phone, with a mapping link to the last known location.

And while we may all take our phone technology for granted, author Judith Newman has written a book called “To Siri With Love” about her autistic son’s love affair with his phone’s personal assistant.

“Gus often talked like he had marbles in his mouth,” said Newman, “but this forces him to enunciate in order for the voice recognition software to know what he’s saying. My son’s hours of practice with Siri have translated into more facility with actual humans. I am having longer and longer conversations with my son, thanks to his personal assistant.”

“Kids with autism tend to gravitate toward adults, as they tend to engage them,” said New Orleans licensed behavior analyst Jennifer Pla, who treats those with autism spectrum disorder. “But technology is even more consistent. It’s immediately responsive, and for those with autism, that’s very reassuring. Technology is also nonjudgmental, and that’s a big bonus.”

In the future, traditional plaster and plastic casts for broken bones will likely be replaced by flexible casts made from 3D printers using precise scanned images of the injury.

Vocal biomarkers which can detect the slightest changes in your voice will screen for ailments as diverse as stress, depression and heart disease, said Yuval Mor, CEO of Israeli “emotions analytics startup” BeyondVerbal, which is working on that technology.

And organ donors may become a thing of the past, if stem cell technology can grow usable organs in the lab, said Bruce Bunnell, PH.D., Director of the Tulane Center for Stem Cell Research and Regenerative Medicine. Scientists have already grown beating hearts in a petri dish.

For patients, the advances can’t come too soon.

Said Steven Gleason: “I think it’s funny when someone writes that I’m imprisoned by my wheelchair. I am liberated and set free by technology.”

BY LESLIE CARDÉ | Special to The Advocate

Life on the Hill