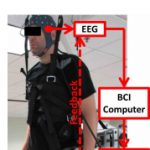 With the Paralympics in full swing in London this week, it’s interesting to see the extraordinary advances being made in prosthetic limb technology.

Today, An Do at the Long Beach Veterans Affairs Medical Center in California and a few pals say they’ve built and tested a prosthetic lower limb that can be controlled in real time by EEG (electroencephalogram) signals fed into a computer.

Do and co have been tackling this problem for some time. In previous work, they developed a way of using EEG signals to control the walking motion of an avatar in a virtual environment.

The system works well both for able-bodied subjects and those with spinal cord injury who are unable to walk.

Now they’ve taken the obvious next step and connected their mind-computer interface to a robotic leg.

Do and co tested the system using an able-bodied subject who mastered the system in just 10 minutes (although he previously had 5 hours of practice with the virtual avatar system).

An important measure of success is the number of false positive signals the system generates, since unintended steps are potentially life threatening for the user. (Imagine waiting for a train or to cross a road.)

Do and co say the system had 100 per cent response rate with no unintended steps. “By the end of the experiment, the subject had no false alarms,” they say.

That’s a significant development. The team points out that individuals with paraplegia due to spinal cord injury are unable to walk and most are wheelchair bound. This inactivity causes untold health problems, such as metabolic disfunction, heart disease and osteoporosis.

However, there are significant challenges ahead. Do and co need to test their system on a subject with spinal cord injury. Beyond that, they need to show that these systems are practical from a computing and power point of view and, above all, safe both for the users and the people around them.

One day, these systems may even be an issue for the paralympics. Last night, the South African “blade runner” Oscar Pretorious complained that he was beaten by a competitor whose blades gave him an unfair advantage in height and stride length.

Who knows where this debate will go once athletes begin to race with brain-controlled robotic legs.