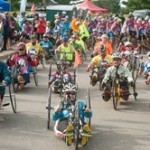 The Kelly Brush Foundation has awarded more than $135,000 in grants to both better the quality of life for those with spinal cord injury (SCI) and improve ski racing safety, foundation president Charlie Brush announced. Grants were awarded to individuals for adaptive sports gear and participation and to ski racing clubs and organizations for safety equipment.

The total amount granted, $135,853, represents the most support, in funds and number of grants awarded, since the foundation’s inception eight years ago.

“We at the Kelly Brush Foundation are excited to be expanding our reach, making positive change in the lives of those with spinal cord injury and shifting the paradigm when it comes to safety in ski racing,” Brush said. “With each grant for adaptive sports gear, the foundation makes a meaningful contribution to helping those with SCI conquer the challenges of paralysis through love of sport. For every ski racing safety grant awarded, we continue the work of improving the safety of the sport and preventing injury.”

Through the foundation’s Individual Grant Program, 42 recipients received a total of $112,941. Thirty three received funds for purchasing adaptive sports gear such as handcycles and monoskis. Nine were given assistance to experience an adaptive sport in hopes that they will elect to make the sport a part of their lives.

Brandon Garner, 25, of Indianapolis, Ind. was among the adaptive equipment grant recipients. Garner sustained a spinal cord injury while playing rugby that left him paralyzed from the shoulders down and ventilator dependent. Garner has rediscovered his love of sports through power soccer, an adaptive version of the sport played in power wheelchairs, but has had to play in a chair that has not been modified for the game. He was awarded $11,000 for a wheelchair customized for power soccer.

“All my life I have played sports of some type. This equipment allows me to continue to do that and to be able to compete. Power soccer is one way I get some normalization back in my life and not allow my accident to control my present or my future,” Garner said. “My dream is to become good enough to make the U.S. Power Soccer Team and travel abroad for the tournament.”

Ski Racing Safety grants were awarded to seven clubs totaling $22,912. These grants further the foundation’s mission to improve ski racing safety by helping clubs to buy safety netting for training and race courses and safety gear for athletes. Mad River Ski Club in Waitsfield, Vt. was among the grant winners.

“For a small race program like Mad River Ski Club, support from the Kelly Brush Foundation is vital. Mad River Glen understands that inside the race arena we need to prescribe to a high standard of safety. The funding we received enables the club to purchase B-Net to line our training and race venue and comply with USSA requirements. In addition, we will not have to rely on borrowing netting from other clubs, which is a huge improvement for our program,” said Jim Komarmi, Mad River Ski Club head coach.

The foundation raises the majority of its funds through an annual bicycle ride in Middlebury, Vt. The Kelly Brush Century Ride Powered by VBT Bicycle and Walking Vacations has raised nearly $1.5 million for adaptive athletes and ski racing safety over the past eight years. In addition to drawing more bicyclists than any other charity ride in the state, the event is the region’s largest for adaptive athletes using handcycles with more than two dozen participants taking to the course last year. The ninth annual ride is set for Sept. 6, 2014.

About the Kelly Brush Foundation: The Kelly Brush Foundation is a nonprofit organization dedicated to improving ski racing safety, enhancing the quality of life for those with spinal cord injury (SCI) through providing adaptive sports equipment, advancing scientific research on SCI and supporting the U.S. Adaptive Ski Team. The foundation has raised nearly $1.5 million and assisted in procuring over 400 miles of safety netting and other safety equipment for ski racing organizations as well as launched a successful public awareness campaign about ski racing safety. The foundation has also purchased more than 100 pieces of adaptive equipment for paralyzed individuals, getting them back into the sports they love. Kelly Brush Davisson, together with her family, started the foundation in 2006 after she sustained a severe spinal cord injury while racing in NCAA Div. 1 competition as a member of the Middlebury College Ski Team in Vermont. The Kelly Brush Foundation affirms Kelly’s ongoing commitment to live life on her own terms and better the lives of others living with SCI. http://www.kellybrushfoundation.org

IMAGE CAPTION: Kelly Brush Davisson, center, leads a field of 25 adaptive athletes and dozens of cyclists at the start of the Kelly Brush Century Ride Powered by VBT Bicycling and Walking Vacations on Sept. 7, 2013 in Middlebury. Vt. The foundation announced its annual round of grant awards totaling $135,853 for adaptive sports gear for individuals with spinal cord injury and safety equipment for ski racing clubs. (Photography © 2013 Rajan Chawla Photography)