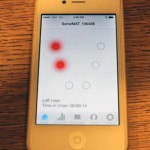 Pressure sores are the leading source of infection, hospitalization and mortality for wheelchair users.

But a new wheelchair sensory system developed through a collaboration with SensiMAT Systems and the University of Toronto’s Professor Milos Popovic is poised to help.

“Take for example, the sad story of Christopher Reeve,” says Popovic. “After his injury Christopher Reeve and his foundation poured millions of dollars into stem cell research. But in the end, he died from a pressure sore that could have been prevented by this inexpensive solution.”

A professor at the Institute of Biomaterials & Biomedical Engineering (IBBME) and Toronto Rehab Chair in Spinal Cord Injury Research at the Toronto Rehabilitation Institute (TRI), Popovic met SensiMAT System’s David Mravyan and his father Michael in 2007 at TRI’s Research Day.

“I’d been churning around in my mind two or three ideas that could be turned into products. One of those was a sitting cushion. We talked about what it should do, which patients it could help,” says Popovic, who was named one of the University of Toronto’s Inventors of the Year in 2013.

According to recent data, there are 2.2 million people who rely on wheelchairs in the U.S. and Canada alone. Up to 350,000 of that number suffer from spinal cord-specific injuries, a population with the highest risk of developing pressure sores – with a 95 per cent lifetime incidence rate of developing an ulcer.

Pressure sores are caused by poor circulation and increased pressure – for instance, from prolonged periods of sitting in place – where the skin and surrounding tissues become damaged. Even a small sore that is treated effectively still carries with it a high risk of infection that can lead to surgeries, hospitalization, and in some cases, death.

The cost of treating pressure sores is estimated at 14 billion dollars annually.

The SensiMAT is designed to help wheelchair users prevent pressure sores from forming in the first place. The system consists of a sensor-lined mat tailored to fit a wheelchair user’s existing cushion.

Once the user sits in a chair, Bluetooth technology sends signals from the pressure-sensing mat to a smart phone app that alerts the user when – and where – pressure has begun to build up, following traffic light colours: red for trouble spots, green for pressure-free zones.

As alerts can be monitored remotely, the system is also ideal for caregivers of those who are immobile or unable to respond to the app alerts. The simple and versatile design has also been sought after by occupational therapists who want to track their patients’ level of activity outside the clinical setting.

But the SensiMAT isn’t just for the most vulnerable populations.

“During our research we found that even people who are very active in their chairs and who diligently complete their pressure reliefs are at risk of developing sores,” says Mrayvan.

SensiMAT, which patented the technology in 2012, is now looking at ways to expand the sensory system for use in long-term care facilities. Rather than waiting for set rotation hours, the SensiMAT system could alert caregivers that bed-bound patients need to be moved. Data can also be collected over the course of weeks or even months, and could help care facilities determine the level of health and care of their clients.

“What this system offers is a quality metric for long term care reporting,” says Mravyan.

The SensiMAT is currently undergoing testing at the Lyndhurst Centre, part of the Toronto Rehabilitation Institute. In March, SensiMAT Systems will launch a crowdfunding campaign to help the company bring this product to market.

Provided by University of Toronto
by Erin Vollick