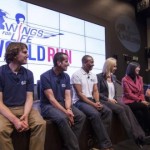 The story of how Austrian entrepreneur Dietrich Mateschitz became one of the richest men in Europe is a remarkable tale of an opportunity seized.

As a travelling salesman for Unilever, Mateschitz came across a Thai concoction called Krating Daeng made with sugar, caffeine and taurine.

Together with Thai businessman Chaleo Yoovidhya, he carbonated the substance and introduced Red Bull to the world 30 years ago.

Red Bull has made Mateschitz an enormously wealthy man. Forbes estimated his wealth at $8.1 billion (€5.9 billion) last year. Red Bull has become a multimedia company and an unstoppable juggernaut.

Away from Red Bull, Mateschitz’s big preoccupation is to fund research into spinal cord injuries, an interest that arises out of his friendship with motocross rider Heinz Kinigadner.

Kinigadner’s 23-year-old son, Hannes, became a paraplegic after suffering a severe injury in 2003, and his brother Hans, also a motocross athlete, has been bound to a wheelchair since 1984.

Mateschitz, through his Red Bull Wings For Life Foundation, has financed research into spinal cord injuries for years and funds 82 projects around the globe.

Despite his millions, spinal cord research remains underfunded though its catastrophic impact affects at least 10,000 individuals in Europe every year, many of them in the prime of their lives.

Painfully slow progress
Progress in helping people with spinal injuries to walk again has been painfully slow. Nevertheless, Dr Jessica Kwok, a neuroscientist at Cambridge University, says there is hope.

“One of the earliest drugs that we can see in dealing with the central nervous system disease will be for spinal cord injuries,” she says. “There are things out there we can try but it is very complicated and is a multifactorial illness.

“At the same time, we are starting to get close to the stage where we have treatments that will show an improvement.”

The great hope for spinal cord injury victims is stem cell research. This was championed by the former Superman actor Christopher Reeve when he was alive.

Reeve was thrown from a horse in 1995 and ended up a quadriplegic. He devoted the rest of his life to lobbying on behalf of people like himself until his death in 2004.

The Christopher and Dana Reeve Foundation have been tireless advocates for spinal cord injury victims.

The medical profession once regarded the prognosis for severe spinal cord injury patients as hopeless. Once severely damaged, the cells in the spinal cord and brain could not regenerate or be replaced, but the advent of stem cell treatments has given new hope to such patients.

According to Kwow, there are now two trials relating to the transplantation of stem cells into the human body. Early research has shown that they have an impact on damaged neurons, but research remains in its infancy. Promising results have also been found in rats.

Lack of funding
There are six clinical trials of drugs which have passed stage one research, but lack funding to go to the second stage. Some of them do not constitute a cure, but target certain symptoms of spinal cord injuries and help to restore certain functions.

“More basic research needs to be supported in order to make us understand exactly what happens in spinal cord injuries,” says Kwow. “The approach towards spinal cord injury has to be two-fold. There is no immediate quick fix. We have to look at the basic science. What happens physiologically?”

Kwow says the failure of the medical profession to find a cure that will help spinal cord victims to walk again is down to the complexity of the problems involved. After a catastrophic injury to the spinal cord, the body tries to shut down the affected area.

“The body does not favour regeneration of the neurons. We can stabilise patients now. We need to come back to evolution and make the environment non-inhibitory to neuron growth.

WWe need to fight against evolution to make it more penetrable. The connections to the peripheral nervous system are also important. It is a very complicated situation. If you just have medical expertise in one area, it is not going to be enough.”

Kwok believes there is a lot of money for neurological research but most of it was going on other conditions such as Alzheimer’s disease or Parkinson’s disease. As a result, spinal cord injuries often lose out.

Red Bull’s Wings for Life Foundation funds 82 different projects into spinal cord injury. Kwok says it is impossible to promise a breakthrough to those victims of spinal cord injury, but there is hope that those young people who are currently confined to wheelchairs will one day walk again.

“We are proceeding by small steps. There are lots of small projects that are giving us insights into where we should go for the next projects. I couldn’t say if they will be able to walk in 10 years, but everything we are doing is important.”