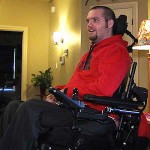 LAWTON, Okla. A stem cell surgery procedure, not yet approved by the FDA, could give a local paralyzed veteran the use of his arms again.

Two years ago, retired Senior Airman Ted “TJ” Williams was left as a quadriplegic when his Humvee rolled over in a freak accident while on duty in Montana. He spent several weeks in a coma.

Now, he and his wife have found a surgery that may improve his physical abilities. They’re dipping into their funds to pay for the procedure, since it’s not covered by insurance, but they’ve set up a GoFundMe account to raise $7,500 to cover travel expenses out of the country to get the treatment.

Williams is able to move his left wrist and arm more, and has even gained more core control, thanks to therapy. But, he still needs his wife’s help for simple tasks like getting dressed and using the restroom.

Williams sits next to his wife in his wheelchair and watches TV. Years ago, he would’ve been running outside, but one accident changed everything.

“I just remember leaving base and then waking up 2 or 3 weeks later, wondering where am I. I couldn’t move anything. It was just shocking seeing my family around my bed. I was just like, ‘Wow. What’s going on,'” recalled Williams.

On November 29, 2012, Williams was on duty with his security forces team. He was in the back seat when his Humvee suddenly swerved to miss a herd of deer, rolling several times. He was ejected from the vehicle and was later found 60 feet away.

Williams was rushed to the hospital. When he woke up from the coma, doctors told him he had broken the vertebrae in his neck and lost function from the chest down.

“I was really upset and scared. Me and my wife are young. We haven’t had children yet or anything. It scared me not knowing what the future was to hold,” said Williams.

He was sent to a VA hospital in San Antonio for in-patient rehab. Once he was finished, he met a physical trainer in who specializes in exercises for those who are suffering from spinal cord and other neurological injuries, which was just what he needed.

“They would get me out of my chair. They would walk me, they would stand me. I was pretty much working out,” explained Williams.

During his treatments, he heard about a stem cell treatment from one of the co-founders of the exercise program. The only problem was that it wasn’t FDA approved, and the Air Force wouldn’t cover costs. Williams says he will have to get treatment in Panama City, Panama, but will be treated mainly by American doctors who will quickly set him up with a donor.

“They’re going to take umbilical cord cells from a donor, then take stem cells from bone marrow in my hip. Mix it together and enter it in my body through an IV. And then also do spinal tap below my level of injury,” said Williams as he explained the process.

Williams says he is excited for the treatment as he believes it will be a step in the right direction and hopes to inspire others like him.

“Hopefully, to be an example. To really show people this isn’t a permanent injury. I don’t think anything is permanent if you put your mind to it,” said Williams.

Williams’ wife set up a GoFundMe account for TJ in an effort to raise $7,500 to help with airfare, their stay and food. So far, they’ve raised nearly $5,000. They estimate the overall cost for flights, medical bills and lodging will reach as high as $45,000.

Williams and his wife will leave for Panama City on March 7. He will begin treatment on March 9 and will immediately start physical therapy. He will be in Panama for about a month.

Expert on spinal injuries to speak at Princeton library