Morphine might take away pain, but does it do more harm than good? 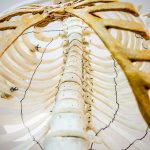 The damaging effects of giving morphine after a major injury

A soldier on the battlefield, a driver in a car accident, a nursing home resident taking a bad fall—all of these scenarios can lead to spinal cord injury as well as broken bones, contusions, lacerations and other painful wounds.

To alleviate some of the discomfort, health care providers might give morphine, but research at the Texas A&M Health Science Center shows that this might be the worst thing they can do.

Receiving morphine soon after a spinal cord injury can make things worse for future recovery, according to work done by Michelle Hook, Ph.D., assistant professor in the Department of Neuroscience and Experimental Therapeutics at the Texas A&M College of Medicine. She works with animal models of spinal cord injury, hoping to develop better treatments that could lead to better recovery.

“When we gave morphine soon after injury, we found that even a single dose reduced recovery in locomotive function, irrespective of how we administered the morphine,” Hook said. But when the morphine is given may be important.

When patients are in the “chronic phase” of spinal cord injury—in other words, several months after the accident—morphine doesn’t undermine their recovery. On the other hand, if the drug is given soon after the injury occurs, there are major problems. “We all took it at face value that how it acted in the burn victim is how it acted in the spinally injured, and that’s just not the case.” Now, Hook wants to find out why that is and how to make morphine safe.

“Morphine is a mainstay pain treatment,” Hook said. “For some people, morphine is the only effective treatment that they have.” Therefore, simply discontinuing its use may not be an option, but by studying the molecular effects of morphine administration and working out exactly what is causing these adverse effects, she hopes to be able to stop them. “Ultimately we need to make morphine safe for the spinally injured,” Hook said.

Laboratory experiments have shown that morphine, in the right concentrations, can kill cells, and after an injury cells are much more vulnerable. Hook’s experiments show that morphine kills neurons—which are, of course, just a type of cell. Morphine doesn’t do any favors for supporting cells in the spinal cord, called astrocytes and microglia. “When you give morphine, a lot of them disappear,” she said. “It’s no wonder that you’d have decreased recovery of function.”

Hook and her team are now trying to determine, at a molecular level, what exactly is causing cell death. Right now, the prime suspect is something called the kappa opioid receptor, which morphine binds to. For some reason, after a spinal cord injury, the kappa opioid receptor is now located on microglia. This is a problem, because when they are activated, microglia can release cytokines, which themselves are cytotoxic, meaning they kill cells.

Although her work is done in animal models, Hook thinks some of the results can be applied to humans as well. “Looking at the images, I find it very hard to believe that it’s not detrimental in humans too,” she said.

Now that she’s almost figured out the pathway, Hook and her team are trying to develop a compound of some sort that could be given with morphine to alleviate some of the harmful effects. “I feel like we’re getting very close,” she said. “If successful, the results of these experiments have the potential to change clinical practice. The aim is to provide clinicians with a means for treating pain without fear of compromising recovery in the spinally injured, as well as in patients with other forms of inflammatory neurotrauma, such as traumatic brain injury.

What is “Autonomic Dysreflexia?”

What research is being done?