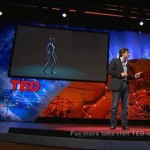 It only takes a moment for an accident to sever or damage an individual’s spinal cord enough to result in paralysis. In this amazing TED Talks video, on research scientist explains how his team has developed a treatment which has allowed a paralyzed lab rat to walk, and they hope could lead to an ultimate cure for spinal cord injurys.

When the spinal cord is injured, it can sever the communication between your brain and your body, which produces the paralysis.

As seen in this video, Grégoire Courtine and his team show a new method that could re-awaken the neural pathways and help the body learn again to move on its own.

As described in the video, the approach combines drugs, electrical stimulation and a robot to help the body and the brain, in effect, help themselves.

Courtine’s approach is to use a combination of a chemical cocktail, delivered into the area of the spinal cord below the injury, along with electrical stimulation to begin the rehabilitation.

This is combined with a sort of robotic prosthetic device which is used to continue the rehabilitation and keep the muscles in the paralyzed areas active and engaged.

In his rat, this stimulation, drugs and rehabilitation eventually led to the regrowth of the neural pathways linking the spinal cord to the brain – essentially allowing the body to repair the damage.

Courtine, who was greatly inspired by the late Christopher Reeves, cautions that this is not currently a cure for spinal cord injuries and paralysis, but his team continue to push forward with that ultimate goal in mind.

Disabled veterans refuse to let their injuries slow them down