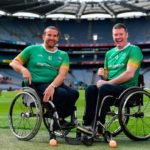 The question was always coming, so obvious and predictable that they can see it sailing through the air long before it’s fired their way. Pat Carty and James McCarthy, the captain and vice-captain of the Irish wheelchair hurling team, know that before we talk sport, about the rich and varied abilities they’ve honed in recent years, there’ll be an inevitable query about their disabilities.

So let’s go to it straight off the bat.

Carty, 51, has been in a wheelchair for three decades – his life divided into the before-and-after of a cataclysmic crash in September 1988.

He was 20 at the time, a farmer from Sligo who worked part-time for a local baker. Driving home one night, fatigue got the best of him and, less than half a mile from his house, he nodded off at the wheel, flipping his car in the subsequent crash.

He came around with barely a scratch on him, but the damage, it turned out, was more internal – Carty broke the T11 and T12 vertebrae in his back and severed his spinal cord, losing all power from the waist down.

He spent six months in hospital, learning the skills to navigate his way through an altered life. Five years earlier, he had played in Croke Park with the Sligo U-16s, and it was only natural that he wondered if that kind of buzz now belonged to the past.

As headstrong as he was, folk wouldn’t be long telling him his business, blinded by outdated beliefs. He remembers a local cattle mart where he was buying and selling from his wheelchair and colleagues refusing to believe he was still operating a functioning farm.
“It’s funny how they put people into a box,” he says.

James McCarthy knows the feeling. Born with spina bifida, he has used a wheelchair all his life but even as a kid, he refused to let it quell his competitive fire.

Wheelchair sport wasn’t really a thing in 1970s Limerick, so McCarthy would sit and watch in primary school as his classmates let rip without him. “Spending an hour a day three days a week on a physio table was not my idea of fun,” he recalls.

But in April 1983 his dad was approached by a man organising teams for a disability sports day in Santry – McCarthy was first in line. “I won a medal and from there I was hooked,” he says. “I was very lucky my parents were supportive of me and my independence.”

He’s been to two Paralympics – 1996 in Atlanta and 2012 in London – but called time on his athletics career in 2013, though he continues to work in the sport as a coach.

Over the years he’s bounced from rugby sevens to basketball, rowing to shot-putting – all of it done at international level.

“When I throw on that Irish jersey, no matter how many times I’ve done it, I still get goosebumps,” he says. “It’s such an honour. That last five minutes when we’re tiring, you just have one look down at the crest and it’ll drive you on.”

So how did the two of them end up here, whacking a ball around Croke Park and shooting the breeze with GAA president John Horan?

It goes back 20 years – to a bit of innovation by a Kerryman living in Dublin who created a sport that hooked right into their veins.

Tim Maher, a teacher at a school for children with disabilities in Baldoyle, was a hurling fanatic who noticed kids loved a certain game where they hit footballs with tennis rackets.

He wondered why wheelchair hurling wasn’t a thing, so he made it one, buying a rake of undersized 24-inch hurleys and inviting hordes of wheelchair users from around Dublin schools to participate in a league.

It was many years later, in 2013, when Carty and McCarthy got their first taste of it and both have played ever since. Over the weekend they represented rival provinces at a competition in Omagh, while next week they will be team-mates – captain and vice-captain of the international wheelchair hurling team.

The 12-man panel will travel to Breda in The Netherlands to take part in the European Para Games Floorball International and, while the rules are closer to hockey, McCarthy expects the same physicality.

“We haven’t been told too much that the big hits are outlawed so we’ll be trying a few of them and seeing what the referee says,” he laughs.

One of the great misconceptions is that wheelchair sports are played in a more polite manner. “The hits are big,” says McCarthy. “But if you fall out of the chair you get back into it. It wouldn’t be doing it justice if we had a tippy-tappy game – it’s a contact sport.

Win or lose, there’s much to be gained simply by showing up – just like any sport.

“It’s not about what you play or how you play, it’s about being out there and playing,” says Carty, who avoided sport during his early years in a wheelchair when he “just got lazy”.

But wheelchair hurling has been different, a buzz that’s allowed him to recapture his youth. “I didn’t think I’d enjoy it as much I do, but when you hear the crowd roaring it does give you a lift.”

A new initiative this year means the scores don’t count for the third quarter of each game, which means even the weakest players get plenty of game-time to bolster their ability.

McCarthy found his ball skills were relatively brutal at the start, but he’s since become one of the game’s best exponents. He thinks back further – to how things were when he grew up and how they are today: that wide differential in sporting opportunities for disabled youngsters.

“Forty years ago, people wouldn’t even think of the outlet, but now we have people who think outside the box and have that vision,” he says.

“It’s to break down those barriers and show them what we can do, not what we can’t do. When I was growing up I saw Paralympians and thought, ‘Wouldn’t it be cool to be like them?’

“So my hope is that you might have some kid who sees this and goes, ‘I’d love to play that. How do I get involved?'”

Pancakes with a purpose