Billy Roussel is a risk taker. Always has been.

So when he saw a platform high in a tree with a cable over the waters of Lake Bistineau while fishing with 12-year-old son Seth, he didn’t hesitate to shimmy up to it and jump.

“My last words to my son were ‘Here goes nothing.’ When I made the swing, I couldn’t hold on to the cable. I ended up hitting the ground, bouncing off a cypress knee into the water. I knew I had done something. I couldn’t lift my head, I couldn’t move my arms or legs.”

That day, June 14, 2009, Roussel became one of the approximately 500,000 people who sustain a spinal cord or brain injury annually in the United States, according to ThinkFirst of the Ark-La-Tex.

If not for his son, Roussel would have lost his life.

Seth swam from the boat to his father and turned him over. Roussel was conscious and aware enough to give instructions.

“I said, son, you’ve got to keep daddy’s head above water. I said I’ve done something to my neck, I can’t move my arms, I don’t know what I’ve done.”

But Seth didn’t give up and eventually got Roussel to the bank, where he rested his head on a stump. He told Seth to cut a piece of rope, loop it under his armpits and tie him to a tree so he wouldn’t float back out into the water, then to call 911 and his mother.

The rescue crew tracked their general location through his cell phone, Seth yelled to direct them to the exact spot.

“My son saved my life that day. If he hadn’t pulled me out, I would have drowned. I couldn’t hold my head above water. I called him a man after that happened.”

Roussel was airlifted to University Health Shreveport. The impact had damaged his spine at the C3-C5 area of his neck. During surgery, his C4 vertebra was replaced with a cadaver bone.

Today, Roussel has feeling throughout his body, but he describes it as a tingling sensation. He is able to move his arms, bear weight on his legs and has taken a step with a walker, but must rely on a motorized wheelchair to get around. “I can move my hands, but they’re not functional. I can’t use my hands to open a door or shake a man’s hand. I can’t comb my hair, I can’t brush my teeth.”

A carpenter by trade, he feels his loss of mobility acutely.

Still, he is grateful for the progress he’s made – and the support he’s received from wife Melody, caregiver Cedric Ragster and friend Scott Wells, who also sustained a spinal cord injury.

Roussel’s spinal cord doctor told him less than 1 percent of people who have his type of spinal cord injuries ever return to the point he has. “It made me realize that God was in it all.”

If he could do it all over, he wouldn’t take the risk.

“The Bible says time and chance happen to everyone. I think that’s what happened to me. It was a time and it was a chance I took. If I had known on the other side that was going to happen, I wouldn’t have done it. Things are going to happen to anybody, any time, any place, but if you use your head and realize the possibility of what could happen, like I should have … I realized I was taking a risk, but I wanted to take it anyway because, honestly, I had been like that most of my life. Even my wife, the day we left, she told my 12-year-old son not to let me do something I shouldn’t be doing.”

“Think First,” the slogan for ThinkFirst National Injury Prevention Foundation, is what he would say today to those of his personality type contemplating a risky move.

The potential consequences are just too high.

Each year, more than 500,000 traumatic brain and spinal cord injuries occur in the United States, according to ThinkFirst of the Ark-La-Tex, which strives to prevent brain, spinal cord and other traumatic injuries through education. The most common causes are vehicle crashes, violence, falls and sports, in that order, which means that many of these lifelong injuries are preventable if you remember to:

• Wear your seat belt every time you’re in a vehicle, no matter where you sit.

• Never text and drive – you are 23 times more likely to be involved in a crash when texting and driving.

• Feet first, every time. Carefully walk into water to check for depth and objects before diving or jumping.

Source: ThinkFirst of the Ark-La-Tex 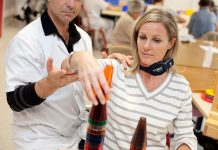 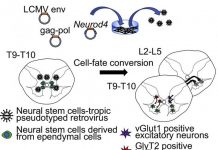 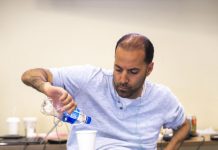 Glimmers of hope as scientists continue their search for the ‘next...