A new deal for the disabled 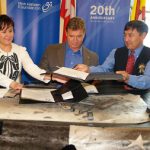 The Government of Nunavut and the Rick Hansen Foundation have signed a partnership agreement that both sides hope will improve services for Nunavummiut with disabilities.

Hansen, Premier Paul Okalik, and Leona Aglukkaq, the health and social services minister, officially signed the agreement at a news conference June 6. The deal was announced in March, but Hansen’s flight north was cancelled by bad weather.

The government will spend $100,000 over five years to found a “Nunavut Solutions Team” that will work on ways to increase wheelchair accessibility in the territory.

“We look forward to working with our partners in government and the community in Nunavut to improve the quality of life of people with spinal cord injury and related disabilities and advance research towards a cure in the future,” Hansen said in a news release.

Aglukkaq said the Rick Hansen will provide expert knowledge to the Nunavut Solutions Team and will spend all of the $100,000 within Nunavut

Rick Hansen, Premier Paul Okalik, and Leona Aglukkaq, the health and social services minister, sign a partnership between the Rick Hansen Foundation and the Government of Nunavut at the legislature in Iqaluit June 6. The Government of Nunavut will spend $100,000 over five years on initiatives for disabled Nunavummiut with “expert knowledge” provided by the foundation.

In 1987, Hansen circled the globe in a wheelchair to raise awareness and money for spinal cord injuries. His trip to Nunavut coincided with the 20th anniversary of the Man In Motion world tour.

“His tour inspired us to see the world through his eyes and to address accessibility in our own communities,” Okalik said. “Twenty years later, he is continuing his good work.”