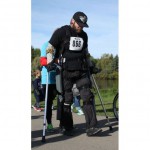 Denny Ross – paralyzed from the chest down in a car accident – has gone from counting his steps to counting kilometres, attempting to finish a five kilometre race with the use of a ReWalk exoskeleton on Saturday.

“It’s a huge step,” he said with a laugh while taking part in the N.E.R.D. Run at William Hawrelak Park, an annual fundraiser supporting the University of Alberta’s Neuroscience and Mental Health Institute.

Ross has been using the exoskeleton as part of a pilot study examining the effects of using the ReWalk device, purchased by the Spinal Cord Injury Treatment Society in 2014 and leased to the university for the trial.

The ReWalk exoskeleton uses a tilt sensor to control motors at the hip and knee joints to move the wearer’s legs, enabling them to walk.

Ross was able to complete the first half kilometre of Saturday’s race with the ReWalk exoskeleton – having to navigate turns, uneven terrain and steep hills – but due to a mechanical failure had to finish in his wheelchair.

Still, for someone who just five years ago thought he would never walk again, it was an achievement not just for himself, but for all hoping to see this technology advance.

“It was just as amazing now doing this today for the first time as (it was) taking the first step. Every day is a new day and we are going to keep trying to push the envelope,” said Ross.

“It is very exciting just to see him up and walking around. It is a miracle,” said his mother, Sue Ross, who joined other members of his family to see him race.

Karim Fouad, director of operations and basic research at the U of A’s Neuroscience and Mental Health Institute, said he was glad to show the public the strides being made in spinal cord research.

“This is just the beginning. The exoskeleton is just a start,” said Fouad, adding, “we have a ways to go, but to have the support from the community to see what we can do is what this is all about.”

But even in the system’s current state, physical therapist Donna Livingstone – who has been by Ross’ side for every step – said the physiological benefits of being able to stand and move upright are already apparent, and she looks forward to seeing the device become more functional in the future.

“Technology has come so far in the last few years, who knows where they are going to end up next year or the year after that,” said Ross.

One thing is clear, no matter what the future brings for the ReWalk exoskeleton, Ross says, “I’ll drive the suit.”