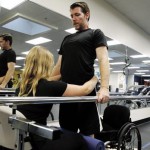 For paraplegic Adam Fritz, the thrill of the computer-assisted first steps he took five years after being paralysed in a motorcycle crash came only after he was unhooked from the system that enabled him to walk briefly in a bioengineering lab.

During the experiment itself, Fritz recounted, he had to keep his mind focused entirely on placing one foot in front of the other as his brain waves were translated by a computer algorithm into impulses that bypassed his severed spinal cord and activated his legs.

“If you break your concentration, it wouldn’t work anymore,” he told Reuters shortly after scientists from the University of California, Irvine, reported the feat in the British open-access Journal of NeuroEngineering and Rehabilitation.

“Once I finished, I had that ‘Oh my God, this thing worked,’ kind of a moment,” the 28-year-old religious studies graduate said. “It was very exhilarating.”

The ‘proof-of-concept’ study documented how brain-to-computer technology, which converts thoughts to body motion, enabled Fritz to become the first person paralysed from the waist down by spinal cord injury to walk without the use of robotics.

As captured in a You Tube video of that pioneering moment last October, it was hardly a casual stroll.

Fritz is seen slowly shuffling with painstaking effort across the floor of UC Irvine’s iMove Lab. His weight was partially supported by an overhead suspension harness and a walker he grasped to keep his body upright.

But researchers said he propelled himself entirely by his own leg muscles, controlled by his own brain, over a distance of 3.66 metres. The weight support was necessary because he lacks sensation in his legs or feet, said An Do, a neurologist and study co-author.

The outcome marked a promising though incremental achievement in the development of brain-computer interfaces that may in the future help stroke and spinal injury patients regain day-to-day mobility, but clinical applications remain years away, Do said.

Fritz, who now works full-time as a disability claims administrator, recounted that his computer-assisted walk posed a rather unexpected challenge.

“The hardest part, honestly, wasn’t taking the steps – it was stopping, because at that point, you’re focusing so hard on getting yourself to walk that to instantly stop, that was actually difficult to do,” he said.

Fritz said it took nearly a year of rigorous physical and mental training to prepare for the experiment, using a specially designed virtual-reality simulator where he learned to control a video-animated character using his own brainwaves.

“I spent months sitting in front of a computer just trying to make that little avatar move, and there were times I felt like, ‘What’s the point? I’m never going to get it’.”

But he eventually caught on. Once ready to take computer-assisted steps of his own, he did so initially suspended a few centimetres off the ground and ultimately with his feet on the floor.

Neural signals produced as he concentrated on moving his legs were detected by an electroencephalogram (EEG) worn over his head, processed through a computer algorithm and relayed to electrodes placed around his knees to stimulate his muscles.

Fritz said he already has volunteered to take part in later research stages in which scientists hope to miniaturise the system with brain implants allowing greater control.

“Seeing this experiment and what this research has done, I think within my lifetime we will see a cure for spinal cord injury, or a treatment to fix it,” Fritz said.