Ten remarkable breakthroughs in the treatment of paralysis 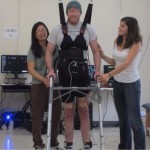 After a man completely paralysed from the waist down became the first paraplegic patient to walk without relying on manually operated robotic limbs, ITV News looks at ten remarkable breakthroughs in paralysis treatment.

Last year, Bulgarian Darek Fidyka was thought to have become the first person in the world to recover from complete severing of the spinal nerves, after cells from his nose were used to provide pathways along which broken tissue was able to grow.

From being paralysed from the waist down, Fidyka can now walk independently and even drive a car.

Four men paralysed from the chest down rose from their wheelchairs after having electrical stimulators implanted in their spines by surgeons.

The Christopher and Dave Reeve Foundation, which helped fund the study, said the research by doctors at the University of Louisville could mean a “bright future” for those with spinal cord injuries.

A study by French researchers saw rats with spinal injuries walk again with the help of an implant which was made of thin prosthetic ribbon and embedded with electrodes.

The implant mimics soft tissue around the spine, meaning the body does not reject it, and delivers electrical impulses and drugs.

In July, Rob Camm from Gloucestershire became the first tetraplegic person in the world to walk in a robotic “suit” controlled by his thoughts.

Camm, paralysed from the neck down in a car crash, had an exoskeleton strapped to his body and controlled it using brain signals recorded by electrodes attached to his skull.

The tool will aid those who have suffered severe paralysis and loss of speech – meaning people who cannot sniff of blink can communicate.

In the latest advance, American Adam Fritz was able to walk without relying on manually operated robotic limbs.

A groundbreaking technique by Prof Oskar Aszmann at the Medical University of Vienna was used to produce bionic hands for people who had lost the use of ends of their arms.

Milo Marinkovic, one of three men to who have had the hands grafted on to their arms, had muscle and nerve tissue implanted from elsewhere in the body.

A new neural technique has allowed a person with paralysis as the result of a spinal cord injury “feel” physical sensations through a prosthetic hand connected to his brain.

While other devices – such as that above – offer control through thought, the development by the Applied Physics Laboratory at Johns Hopkins University in the US offers hope for “feedback” too.

In another breakthrough finding from Ecole Polytechnique Federale de Lausanne (EPFL), scientists used implants to gain complete control of paralysed rats’ legs, allowing them to take over the walking ability of the creatures.

Rats used in the study were paralysed by having their spinal cords severed in the middle back.

Researchers in Baltimore were able to use stem cells from human embryos to partially cure paralysed mice.

A solution containing the cells was infused in their spinal fluid, developing healthy new cells in the damaged area.

What lies ahead- Possible uses