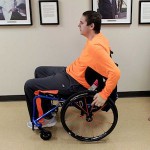 Louis Tontodonato’s hopes and dreams may well lie in a virtual coin flip, a digital roll of the dice.

Paralyzed from the neck down, the 20-year-old Naples, Fla., man has enrolled in the first clinical trial testing the ability of stem cells to repair spinal cord injuries and restore sensation and movement in quadriplegics. Early studies in animals and humans have had remarkable results, enabling patients to resume everyday tasks they thought had been lost forever. If those early effects are validated, the treatment has the potential to drastically improve the quality of life and independence of thousands of spinal cord injury patients.

“This would be a quantum leap in the field,” said Dr. Dong Kim, chairman of the UT-Health Department of Neurosurgery and Director of the Mischer Neuroscience Institute at Memorial Hermann. “This would be the first trial to show regeneration.”

He cautioned, however, it could years before doctors learn how to fully harness the promise of stem cell therapy.

“It’s just such a new field,” he said. “I don’t expect anybody in the next year and a half to get up out of their wheelchair.”

For Tontodonato, the immediate issue is whether he is randomly chosen for the treatment group. If this happens, doctors from Memorial Hermann and UT-Health in Houston will expose his spine and inject neural stem cells at the site of the injury. If not, he will receive the current standard of treatment and may lose his chance of regaining much movement in his arms or hands.

For many patients with conditions for which no adequate treatment is available, clinical trials often offer a last-ditch stab at a cure, tinged with optimism and maybe even denial, with no guarantee of a payoff. They may accept the risks of therapy that ultimately doesn’t work and lose out on other potential cures, or they may sacrifice their limited window for treatment to serve as a non-treated comparison group. Doctors could never advance medicine or prove whether a treatment works without that mix of courage, stubbornness and altruism in patients like Tontodonato.

Two summers ago, shortly before he was due to start college classes, Tontodonato was riding in a Dodge Durango SUV when the driver ran a red light. Struck by a vehicle crossing the intersection, the car rolled and the roof supports crushed onto his head, breaking his neck. After 33 days in a Fort Myers, Fla., hospital, including 26 days in an induced coma, he was almost completely paralyzed from the neck down. He couldn’t eat or talk. He couldn’t breathe on his own.

The only movement he could manage was a shoulder shrug.

“We were told he would never walk again,” his mother, Kelly Tontodonato, said. “They said he was pretty much going to be bedridden.”

He was transferred to a rehabilitation facility in Atlanta, where within a week or two, he was breathing on his own. Over the next three months he recovered his voice. He regained some movement in his arms and hands by undergoing physical therapy three times a week. He estimates his left hand is at about 65 percent to 70 percent of normal, but he has almost no function in his right hand.

“When you lose function in a hand, it’s terrible,” he said. “You can’t pick up your food, your drink, nothing. And you have to have someone do everything for you.”

Patients typically recover some function in the first months after a spinal cord injury, but progress usually plateaus with little chance of any further, meaningful recovery.

“Right now we’re really good at fixing the spine, getting the bones OK and letting you heal,” Kim said. “But we’re not good at letting you get advanced recovery.”

Researchers have long thought that stem cells could bridge the gap, literally and figuratively. These early precursor cells have the ability to transform into different types of cells, providing the building blocks to repair damage. By placing them at the site of the injury to the spinal cord, researchers believe the cells will be able to transform into the nerve cells needed to restore function and movement.

Kim is the principal investigator for one of 12 sites in a study using a stem cell line derived by Newark, Calif.-based, StemCells Inc. These are not embryonic stems cells, which have generated much controversy and ethical debate. The study will use adult stem cells, grown in a lab from donated brain tissue. These neural stem cells can become any of three different types of cells found in the brain and the spine.

“The cell is both the architect and the contractor,” said Dr. Stephen Huhn, StemCells’ chief medical officer and vice president for clinical research. “It interprets the disease environment in which it’s placed, and then it can differentiate into a cell that might be appropriate for that disease. That may be in part what stem cells were designed to do: to repair our brain and spinal cord.”

These neural stems cells are found in small quantities in the brain and spine, but serious injuries may overwhelm the limited supply, he says. StemCells developed a process for isolating the neural stem cells and then replicating them in the lab to create cell banks from which many human doses can be derived. The cells are frozen until a patient is ready for implantation.

While other spinal cord injury studies have measured healing by comparing MRI images, the StemCells study has a much higher burden of proof – improvement in motor function.

“Here they actually have to be able to wiggle a finger or move a toe or have abdominal contractions that they couldn’t before,” Kim said. It’s a high hurdle, but study officials are confident it can be met based on animal research and preliminary studies in humans.

“We’ve had animal data going back over a decade. If you put stem cells into a spinal cord-injured rat, the movement is much, much improved,” Kim said. “We’ve done this in so many animals and it just keeps working.”

Those animal studies paved the way for StemCells to test different doses of its cells in humans. The company ran a phase I study with paraplegics, showing the treatment was safe and could restore sensory function. The company then followed up with six quadriplegics last year with encouraging results.

After six months of treatment, five patients showed improved muscle strength and four were able to improve performance in functional tasks and fine motor skills. Some of the patients were able to pick up a coin from a table or turn a key in a lock for the first time since their injury.

“For us, that’s a very encouraging sign to see,” Kuhn said. “You wouldn’t expect patients to improve to that degree in that period of time.”

Despite the impressive results, without a control group, the researchers can’t know whether patients might have achieved the same gains without treatment. The second part of the study will be blinded and controlled. The volunteer test subjects will be randomly assigned to the treatment arm or a control group, and their progress will be evaluated by an assessor who won’t know whether they’ve been treated.

“In science, we just can’t answer the question, not in a believable way, if we don’t do the two arms at the same time,” Kim said.

To be included in the study, Tontodonato had to agree to accept the outcome of the randomization and not to reveal – including to the Chronicle – whether he had been accepted into the treatment group. If so, he will travel to Houston for the surgery. If not, he will undergo all the assessments, and must agree not to enroll in other clinical studies or undergo other treatments until the control group is assessed after six months.

Huhn says it’s too early to know the long-term potential for stem cells. Researchers are still following patients who received stem cells in the earlier arm of the trial, and they suspect the stem cells will continue to replicate and repair the damaged spinal cords for months or years. The company will also face a considerable challenge in getting its stem cell line approved by the Food and Drug Administration and then getting insurers to pay for it. Company officials said it was too early to determine how much the treatment would cost.

Kim likens the trial to the first attempts at transplantation. It took years before doctors figured out the right drugs and the techniques. Now, organ transplants have become routine and doctors have expanded the field to body parts like hands, faces and scalps.

“Our goal is in 50 years to have significant regeneration, not only in injury, but for stroke, multiple sclerosis, maybe dementia,” Kim said.

Tontodonato is planning to return to college soon, with the ultimate goal of studying law. But gaining the use of his right hand would make that task much easier and provide great independence. He now spends most of his time between therapy visits at home, sometimes babysitting his 3-year-old niece.

At times, he admits, it like feels like she is babysitting him. If he drops something, he can asks her to pick it up.

“You look at somebody who’s paralyzed and they look fine, but there’s so much involved in it,” his mother said.

Refusing to accept the status quo, she scours the Internet for potential cures. When she read about a study that showed the spice turmeric showed promise in rats, she added the compound to his daily regimen of 20 vitamins. She takes him to acupuncture treatments and is always on the lookout for clinical trials that could offer more than just marginal improvement.

Tontodonato had tried to enroll in the first phase of the StemCells trial, until an MRI revealed a cyst in his neck that made him ineligible. But the doctor later called to tell them of the next phase of the study. She went online to enroll but was unable to find a spot in Miami.

“They gave me Houston and all the cold states,” she recalls. “So I said we’ll go to Houston.”

They sent study officials his last MRI just before Thanksgiving and heard back within 24 hours. She had stopped at a stop light on her way home and glancing at her emails, saw he had been accepted. She began to cry and called her son.

In December, Tontodonato and his mother came to Memorial Hermann for the testing and evaluation, and to hear the risks involved.

There are the standard risks of surgery, including infection or complications of anesthesia. For six months after treatment, he’ll be on immunosuppressants to prevent rejection of the transplanted stem cells, which could hamper his ability to fight off diseases.

There’s also a small risk the stems might continue to replicate and grow, much like a cancer. But Kim said that was more a risk with embyronic stem cells than an adult stem cell line.

If Tontodonato winds up in the control group, he could potentially participate in follow-up stem cells studies. But there’s some evidence that stem cells might be most effective within a year or two of the initial injury.

“These treatments may not work after two or three years,” Kim said.

Tontodonato insists he won’t be devastated if he doesn’t wind up in the treatment arm.