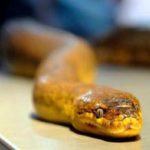 Snakes owe their long and slithery bodies to “junk DNA,” large chunks of the reptile’s genome that scientists once thought to be useless. The gene called Oct4 may eventually help treat people with spinal injuries.

Oct4 is responsible for regulating stem cells and affects the growth of the trunk in the middle part of a vertebrate’s body.

Study researcher Rita Aires, from Portugal’s Instituto Gulbenkian de Ciencia (IGC), explained that genes involved in the formation of the trunk have to stop their activities so that the genes that are involved in tail formation can begin their work.

In snakes, Oct4 remained switched on longer than usual during embryonic development, which can help explain the long trunk and very short tail of snakes

Researchers explained that a quirk in evolutionary changes caused the gene to be placed next to a DNA region that causes the gene to be kept in “on” state longer during embryonic development.

Scientists said that the gene could be another example of evolution that used noncoding DNA to alter the anatomy of animals.

Michael Richardson, a snake specialist and development biologist from the Leiden University in the Netherlands, who was not involved in the research said that typically, the gene itself is not the one that undergoes changes.

“It’s the flanking regions or the regulatory regions,” Richardson said. “What they’ve shown quite clearly here is that the OCT4 gene isn’t different but the timing [of its expression] is prolonged.”

For their study published in the journal Development Cell, researchers wanted to know if the Oct4 gene gives snakes longer-lasting growth spurt, so they studied mice with either abnormally long or short trunks.

The researchers spliced noncoding DNA of snakes into mouse embryos near Oct4 and found that this resulted in embryos that grew large amounts of additional spinal cord, suggesting that the junk DNA plays a role in body shape regulation.

The findings may provide more insights on spinal cord regeneration, which could possibly help patients who suffer from spinal injuries caused by physical trauma such as sport injuries and vehicular accidents, or non-traumatic causes such as insufficient blood flow and infection.

“Now we will investigate if we can use the Oct4 gene and the DNA region that maintains its activity to expand the cells that make the spinal cord, trying to regenerate it in case of injury,” said study researcher Moises Mallo, from IGC.