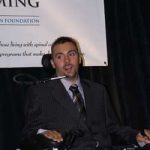 The Michael-Ryan Pattison Foundation, formerly A Cure is Coming, is the legacy of the inspirational effort of a healing community of friends who supported Woodinville resident Michael-Ryan Pattison and his family following his paralyzing injury in 2005. Pattison is convinced that the fact that he is alive today is directly related to his friends’ commitment.

He says, “I was graced to have a supportive community embrace me when this tragedy occurred, but there are many others who do not. The Michael-Ryan Pattison Foundation was created for them and it’s our mission to improve the quality of life for children and adults who become suddenly disabled, as I did.”

Founded by Pattison and his parents in 2007, the organization is focused on establishing a specialized therapy center in the Seattle area that offers Eastern and Western restorative treatments which address the mind, body, and spirit of suddenly disabled persons. When Pattison was injured, he received therapy under the care of Dr. John McDonald at the Kennedy Krieger Institute in Baltimore. Dr. McDonald is well known for his work in pioneering restorative therapies that help people with spinal cord injuries recover sensation, movement and independence. His work was responsible for producing the substantial recovery of actor/activist Christopher Reeve.

The center that Pattison’s foundation plans to create will be anchored by the same restorative therapies offered at Kennedy Krieger.

Pattison comments that currently there are as many as 400,000 Americans living with a spinal cord injury. Each year, 11,000 new injuries of this nature occur. Of those affected, 52 % are Paraplegic (loss of sensation and movement in the legs and in part or all of the trunk) and 47% are quadriplegic (loss of sensation and movement in all four limbs and the trunk).

Pattison explains that on average when a person suffers a spinal cord injury, he/she is initially hospitalized in acute care for 15 days, followed by a stay in a rehab unit for about five weeks. After that, the majority of patients are on their own.

He adds, “What’s tragic is that many of these injured individuals still have a good chance of recovering movement if they continued to receive restorative therapy on a regular basis. But it’s not available to them because of access or affordability. We’ve got to change this and we can!”

Recently, the Michael-Ryan Pattison Foundation held its third fundraiser, a golf tournament, followed by a dinner and an auction. Over 300 people attended the event, which was held at the Glendale Country Club in Bellevue.

According to Pattison, the funds are focused toward four areas: providing financial support for children and adults who need rehabilitative therapy, but can’t afford it; supporting research for a cure; establishing the specialized therapy center in the Seattle area and supporting the operating costs of the foundation so the local healing community can continue to grow.

“The important thing is to encourage people who suffer paralysis that there’s hope and resources available to them,” comments Pattison. “To this purpose, we are also working on creating a website called ‘Spinopedia.’ Our intent is for it to serve as a map for individuals and families who have to deal with a spinal cord injury and paralysis. My dad tells the story of standing in the hospital parking lot after my injury wondering what to do and who to call. We want to bring together persons from around the country who are injured to speak about aspects of the injury, rehab, and the cure — so there is a resource for others who suffer the injury to hear how best to navigate this life-changing event.”

Pattison reports on his own condition and the progress he has made over the past few years. He says he still works out daily and continues to gain strength while remaining healthy. He recently purchased a house, which he looks forward to moving into once the renovations are complete. Pattison is also trying to do more personal outreach to individuals who’ve been recently injured, as he wants to be a source of hope to them.

“Every person who suffers this kind of injury needs to know they’re not alone and life goes on, that life can go on very well,” he adds.

The young man acknowledges that it makes him feel good to know that people in the Woodinville community are still interested in keeping up with his progress. He says, “I’d certainly welcome anyone who would want to help accomplish our goal of creating a truly one-of-a-kind facility for individuals with disabilities through the foundation.”