What is a spinal cord injury? 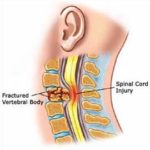 A spinal cord injury means that the spinal cord of a person is damaged and the person cannot do things that they otherwise would have been able to do such as walking (mobility) or feeling in certain parts of their body.

The spinal cord of a person is roughly 50 centimetres in length and it spreads from the bottom of the brain to about the waist. It is a key bundle of nerves that facilitates communication between the brain and the rest of the body, giving instructions to initiate actions such as movement.  It consists of 31 pairs of nerves which connect it to different parts of the body, with the nerves that are on the left connecting with the left side of the body and those that are on the right connecting with the right side of the body (WHO, 2010).

The spinal cord is protected by bones, which sit on each other, which are called (vertebrae) and when these bones are broken due to, for example, the impact of accidents, the spinal cord can get injured. Once the spinal cord is damaged, a person experiences loss of function in parts of his or her body, because that key bundle of nerves which carries messages between the brain and the rest of the body is damaged. It is, therefore, not surprising that a person who suffers a spinal cord injury may begin to experience changes in their body in relation to sensation, strength and ability to carry out certain functions.

The World Health Organisation states that the most common causes of spinal cord injury are occurrences that can be avoided, such as car accidents, falling from a tree or other platforms where people may slip.

Accidents that occur in the work place such as in the construction industry where vulnerability is high as well as acts of violence which include physical attacks on one another may also cause spinal cord injuries. Additional causes include high contact sporting activities such as hockey and soccer and diseases such as cancer, polio and tuberculosis.

Chipo, a former cross-border trader who lives in Harare, acquired physical disability at the age of 38, due to a spinal cord injury which occurred when she was involved in a car accident whilst selling African traditional clothes in South Africa. “My friend and I were given a lift in South Africa and the next thing I heard was a big bang. I only managed to say ‘God of Ezekiel we are here’ and I passed out. I was in coma for three weeks, only to wake up with a doctor on my bedside telling me that I had a spinal cord injury and I was never going to walk again. He also told me that the driver of the truck and my friend had died on the spot.”

In some cases, it may not be clear that a person has suffered a spinal cord injury, so it is important to get to the hospital immediately after an accident. That way, one can rule out the likelihood of a spinal cord injury or at least be able to receive early treatment.  In 2001, Mara was involved in a car accident in Chivhu when she was travelling with her family to her husband’s rural village in Buhera.

A tyre puncture resulted in the vehicle overturning and rolling three times on its back. Although she had acquired a spinal cord injury, she felt no pain and for a week she continued to carry out her daily household duties, moving from place to place, unaware of the health condition that was now embedded in her. “We were taken to Chivhu hospital and they said we were all fine, but they didn’t have the machine to check other things. We were happy that no-one had died, but after one week I started feeling funny and I went to a hospital in Harare. I was shocked when they said I have spinal cord injury, I now use a wheelchair.”

Death is not the only outcome of accidents that we should be afraid of, accidents may also result in permanent disabilities that people may have to live with for the rest of their lives. Spinal cord injury which in most cases causes physical disability comes in various forms that include:

1) Quadriplegia which represents a person’s loss of function on their body (neck downwards), its complete paralysis usually from the neck downwards, including all four limbs (arms and legs), the trunk and pelvic muscles.

2) Paraplegia means loss of function on a person’s body from the chest going downwards (chest, hips and legs).

The terms complete and incomplete are often used to describe spinal cord injury depending on the type and level of the injury.

Some spinal cord injuries are described as complete, meaning that a person loses sensation and voluntary movement from the point where the injury occurs going all the way downwards.

However, with advances in modern treatment, incomplete injuries are becoming the most common. Spinal cord injury may also result in sexual, bowel and bladder dysfunction. The fertility of men is usually affected and that of women may not be affected. A high level of spinal cord injury may result in a person struggling to breathe, and needing assistive devices such as ventilators to help him or her breath.

When one suffers a spinal cord injury, it does not mean that the spinal cord is completely cut off or completely broken. The spinal cord can be wholly in place but the damage that is caused by compression or bruising to the cord is the one that causes the loss of part of the body’s function.

Some people may experience severe pain or pressure in the back or neck, but it does not mean that every person who breaks their back or neck has spinal cord injury. In some instances it is just the bones that surround the spinal cord (the vertebrae) that is damaged but not the spinal cord itself. It, therefore, means that correct treatment of such bones can avoid any form of paralysis that may occur.

Considering that most of the causes of spinal cord injuries are preventable, it is important for example, for vehicles to be in good condition and to avoid careless and drunken driving. The way a person moves from the scene of the accident to a health care centre is important, and admission in hospital should take place rapidly.

A quick diagnosis and management of the spinal cord injury is important. Spinal cord injuries which are not appropriately and timeously attended to may cause death depending on the extent of the injury and the resultant infections.

Affected persons ought to be equipped with appropriate knowledge concerning the management of the injury, such as the use of catheters, so as to avoid infections that may create further complications. Considering the shock, anxiety, grief, anger, disbelief and depression that comes with spinal cord injury, both rehabilitation professionals and families and friends need to play a big role in supporting affected persons emotionally. There is need to show the affected persons that they are still accepted in the community and they can still live worthwhile lives (WHO, 2010).

Dr Christine Peta is a public health care practitioner who, among other qualifications, holds a PhD in Disability Studies. Be part of international debate on how best to nurture a society which is more accessible, supportive and inclusive of disabled people. Partner with Disability Centre for Africa (DCFA)

What Kids Should Know About Spinal Injuries in Sports

Does everyone who sustains a spinal cord injury use a wheelchair?