App helps drivers in wheelchairs get help at the gas pump 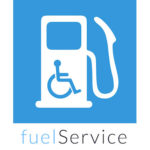 The simple act of filling a gas tank can be an insurmountable challenge for people who use a wheelchair.

That was the experience of Langley resident Zosia Ettenberg.

“It’s literally impossible for me to pump gas by myself,” Ettenberg told On the Coast host Tanya Fletcher.

“I have to park far enough away from the gas pump to get out, and then go around and have enough space for the wheelchair between the car and the pump,” Ettenberg said.

“By that time, a hose doesn’t stretch far enough.”

Now, a phone app called FuelService is transforming Ettenberg’s experience at the pump.

Ettenberg, who is founder of the advocacy group, Pos-Abilities, was asked by the Canadian Spinal Research Organization to participate in a local pilot project for the app.

“You choose the gas station you want to go to. You press the spot on your phone, and they notify the gas station that there’s someone with a wheelchair who needs help pumping gas,” she said.

The gas station confirms whether assistance is currently available, and the driver presses a second button to alert the attendant when they arrive at the pump.

“Sometimes, there’s only one person in the gas station, so they wouldn’t be able to come out and pump and leave the till alone,” Ettenberg said.

FuelService was launched in England a year ago.

Niall El-Assaad, the developer, said he created it in response to his own frustration as a disabled driver.

El-Assaad, who was paralyzed in a cycling accident, said he felt embarrassed by having to honk his horn and wave his disability card at gas stations to get assistance.

Ettenberg said, as full-service stations have disappeared in recent years fuel retailers have not made accommodations to help wheelchair users at the pumps.

“I guess they think if you’re in a wheelchair you don’t drive a car,” she said.

‘We want a life too’

“People in wheelchairs are thinking, we want a life too. We want to be able to do just what everybody else does.”

The Canadian Spinal Research Organization, which is hosting the Langley pilot project for the app in affiliation with Chevron Canada, says proceeds from the app are directed to spinal cord research.

Levitra effective for ED due to spinal cord injury

On a roll for spinal cord research