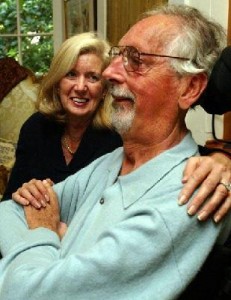 Dr. Luis Cebrian says he feels like he’s trapped inside a shell. “I feel like I’m basically made out of wood or rubber.”

Although he is paralyzed, he is acutely aware of his body. His experience is different from a person who has had a severe spinal injury and has no sensation from the neck down. “I can feel my toes. I can tell you the places where I hurt. I feel tired when I’ve been sitting in one place too long. I feel like I could just get up and walk.”

As he sits in an alcove off his living room talking about what it’s like to be unable to move, Luis’ wife Valerie is at his side. She periodically crosses and uncrosses his legs, puts a glass of water to his lips so he can sip from it and makes small adjustments in the direction his wheelchair is facing. Except for brief respites, she’s his full-time caregiver.

Luis can’t move because he has amyotrophic lateral sclerosis, a disease that attacks and kills the Motor neurons in the brain and spinal cord. The disease eventually makes it impossible for the brain to control muscles or signal them to move.

Living inside a shell can be confining. But Luis says it’s not all bad. “It’s given me time to catch up on my reading.” He can move his head just enough to use a mouth wand to turn the pages of his books. “I’ve been able to read Edward Gibbon’s ‘The Decline and Fall of the Roman Empire.’ I’ve read Marcel Proust’s ‘Remembrance of Things Past’ in French. I have a friend who had read it in English. We got together and discussed it. We called ourselves the Proustian Society.”

By STEVE BROWN – Staff Writer
Chico Enterprise-Record
Luis was diagnosed with ALS in 1994. He hasn’t been able to walk since 1998, the year he had to give up his medical practice. He hasn’t been able to move his arms since 2000. He can still move one finger, but not enough to work the remote on his TV set. He admits he spends too much time watching TV. “The shows that come on in the morning are boring and repetitive.”

More rewarding is the time he spends at his computer. He uses voice-activated software to navigate his way around the Web and do his e-mail. Luis says being able to use his computer is a godsend. “I’m glad we’re living in the technological age.” Over the last few years, several of his letters to the editor have appeared in the Enterprise-Record. He has weighed in on issues ranging from the war in Iraq, to health insurance reform, to the ancestor gates mosaic at Community Park. His opinions have sometimes inspired other readers to respond with letters. “I’ve been attacked (in print) a couple of times.” He said he’s pleased with the effect his letters have had.

Valerie has mixed feelings about that part of her husband’s life. “Whenever I go out and someone asks me if I’m related to Luis Cebrian, I want to say ‘maybe.'”

Luis may be obliged to lead a sedentary life, but he’s not housebound. They have a van that accommodates a wheelchair. They go out to movies and restaurants. “I have to feed Luis,” Valerie said. “If I were in his position, I might not feel comfortable about being fed in public, but Luis is game for just about everything. He’s a very good sport.”

The Cebrians have been to Europe three times since he was diagnosed with ALS. “Italian trains are great for disabled people to ride in,” Luis said.

“We drove around France in a disabled van,” Valerie said.

“All of the London taxis take wheelchairs,” Luis said.

One of their memories of touring Europe is the time Luis choked while they were eating at a restaurant. People who have ALS have difficulty swallowing. “That was a real show-stopper,” he said. “This would be a serious problem for many people, but because I’m a physician I have taught my wife how to deal with that.” Luis was a general practice physician. His office was on The Esplanade. The Cebrians have lived in Chico since 1983.

ALS is called a “progressive” disease, which means the symptoms get worse over time. There is no cure and there are no treatments to reverse the symptoms. “People with ALS have plateaus where nothing changes, then suddenly they take a step down,” Valerie said.

Luis can still speak, but he may lose that ability. ALS eventually affects all of the voluntary muscles. In its later stages, the disease can interfere with breathing.

In the middle of the 20th century, ALS was known as Lou Gehrig’s disease. It was named after the first baseman, shortstop and outfielder for the New York Yankees. ALS forced Gehrig to retire from his baseball career in 1939.

Today, the disease is more commonly associated with Stephen Hawking, a theoretical physicist and professor of mathematics. Hawking was diagnosed with ALS in 1963, when he was 21. He is confined to a wheelchair and hasn’t been able to speak since the late 1980s. Hawking and Luis share a trait that is uncommon in people who have ALS: They are among the 10 percent of those diagnosed with the disease who have survived for more than 10 years. The typical survival time after diagnosis is three to five years.

Luis said he has no idea why he has lived this long, but expects to be around for many more years. “Don’t we all believe we are immortal?” he said. “When I was diagnosed, several doctors offered me their sympathy. Today, many of them are dead or dying.”

He said his biggest regret is his loss of independence. “I am 100 percent dependent on other people.” He said he began living on his own when he was 19. He is now 73. He and Valerie have been married since 1979.

“We have quite a history behind us,” she said. “We’ve shared a lot of fun things in our lives.”

Chico’s first fundraiser walk for ALS will be held Saturday in Bidwell Park. Registration will start at 10 a.m. in the barbecue area at One-Mile Recreation Area. The walk begins at 11. The event, sponsored by the Greater Sacramento chapter of the ALS Association, is called Walk to D’Feet ALS. The one-mile route is wheelchair accessible. Luis and Valerie and Shelley Hansen, who also has ALS, and Luis’ wife Alicia will take part in the walk and opening ceremonies. Jenna Teyshak, who is the niece of a person with ALS, will perform with her band at the ceremonies.

Proceeds will go to the chapter, which provides services to patients, caregivers and families affected by ALS. The chapter serves 24 counties in Northern and Central California. Funds from this event will also support research directed to finding a cure for ALS.