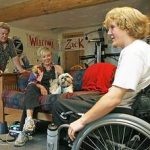 As he was growing up in Grand Lake, everybody knew Zack Peterson as the kid with the big smile and the tousled blond hair who was a good athlete and a great guy.

When you meet him today, he’s still all of those things with one addition. He’s now in a wheelchair.

Zack, who graduated from Middle Park High School in May, was involved in a single-car accident just after midnight on Sunday, July 13. He fell asleep behind the wheel while returning from a trip to Denver and crashed on U.S. Highway 34, a few miles short of his home.

After hours of emergency surgery to save his life, Zack survived but suffered a spinal cord injury that has left him paralyzed below his chest. After recovering for two weeks in a Denver hospital, he was transferred to the Craig Hospital of Denver, which specializes in rehabilitating patients suffering from spinal cord and traumatic brain injuries.

After two months there, Zack was released by the hospital on Friday, Sept. 26, the day before his 19th birthday. He returned home to Grand Lake to start his new life.

“I want to thank everyone for all their help, support and prayers,” Zack said. “I especially want to thank the firefighters, Sheriff’s deputies and EMS paramedics who helped save my life the night of the accident.”

Home conversion
His parents, Jim Peterson and Suzi Maki, have converted what was their ground-level television/recreation room of their home on West Portal Road into his new room.

“With five levels in this house and a bunch of stairs, you couldn’t have designed a more wheelchair-unfriendly home than this,” Suzi said. “But our friends have helped us put in a crushed, recycled asphalt path around the outside of the house to access the outside door of his room.”

An elevator system has been ordered and is expected to arrive in the next few weeks. Once installed, Zack will be able to go outside his door, get in the elevator and be lifted to an upper deck where he can access the kitchen and living room level of the house. His old bedroom on the top floor of the house is too difficult to reach and is too small to accommodate his wheelchair.

Despite the challenges of his new circumstances, Zack still exudes optimism and hope for a complete recovery.

“I hope to walk again one day,” he said. “My spinal cord is straight and has pretty much healed up.”

Jim Peterson also holds out hope for his son’s recovery.

“I was talking to the doctors at the Craig Hospital and they said there is an 18- to 24-month window for people like Zack to get feeling back in their lower body and possibly walk again,” he said. “There are some pretty amazing stories of recovery after spinal injuries like this.”

Moving on with his life
One way or the other, Zack is determined to get on with his life. Since he has been back home, he has gone to a Middle Park High School volleyball game and cheered on his former teammates on the Panther boys soccer team in a game last week. He’s also been shopping and had dinner at a local restaurant. About 30 friends attended his birthday party on Sept. 27.

“I also went to the Granby Medical Center to meet the doctors there and get to know them,” he said.

Although the accident and the months of recovery have disrupted his post-high school graduation plans, Zack is not giving up on them.

“This fall I was supposed to attend Mesa State College in Grand Junction,” he said. “That’s still my plan, but I’ll have to wait until next fall to go. I’m going to major in mechanical engineering.”

While hopeful about the future, Zack admits the past few weeks have been tough.
“I feel decent now and I’m adjusting slowly,” he said. “There have been rough points, but I’m getting used to it.”

Zack still is taking medication for the pain he is experiencing. Two metal rods had to be permanently installed inside his back after the accident.

Remembering the accident
Of the accident itself, Zack said he remembers waking up after his car went off the highway and was airborne. After traveling over 60 feet, it smashed into a large boulder, rolled over crushing the driver’s side roof before finally coming to rest. Thrown bodily onto the passenger side of the front seat, he credits the vehicle’s airbag with saving his life.

“After the crash, I don’t remember anything but waking up in the dark,” he said. “I tried turning on the lights but couldn’t reach them or my cell phone. I began honking the horn.”

A neighbor heard the sound of the crash and the honking horn and called 9-1-1. Grand County EMS, Grand Lake Fire Department and Sheriff’s deputies quickly reached the accident scene.

As the firefighters struggled to cut him out of the wreckage, Zack said the paramedics did what they could for him.

“I didn’t feel any pain, only some blood running down my body,” he said. “I only felt pain as they were pulling me out and I realized I had a dislocated shoulder.”

Due to the seriousness of his injuries, the Flight For Life helicopter landed adjacent to the crash site. Conscious throughout the ordeal, Zack said his right lung then collapsed and the paramedics had to reinflate it by inserting a footlong rod into his chest. Then his other lung collapsed.

“They made me stay awake through the entire flight,” he said. “I tried looking at my legs, but with that rod sticking out of my chest, I decided to spend more time looking at the ceiling of the helicopter.”

After the 16-minute flight from Grand Lake to St. Anthony’s Central Hospital in Denver, Zack was placed on medications and lost consciousness. He had fractured 10 ribs and crushed a vertebrae located between his shoulder blades.

“I woke up in the MRI machine with a wall in front of my face,” he said. “I had no idea where I was and freaked out a bit. They pulled me and told me I was still in the hospital.”
After three hours of surgery later that morning, he began his long recovery. He spent 15 days at St. Anthony’s before being transferred to the Craig Hospital. After a week of further medical tests there, he began physical therapy to help him regain his physical strength and coordination, followed by occupational therapy to learn everyday living skills.

“I had to focus on regaining the strength in my upper body,” Zack said. “I also had to learn balance all over again because I have no feeling below my chest.”

Learning ‘chair’ skills
Three weeks into his stay at the Craig Hospital, he began the “chair class” where he began learning wheelchair skills. The majority of the other students in that class were also young men like himself between the ages of 18-30.

Among the first skills he learned is how to do a “wheelie” by balancing the chair on only its two wheels. Learning it was not just for fun.

“It’s really important to learn the wheelie skill because it helps you get over things like curbs,” Zack said. “Once you know it, you can go down stairs using it. You can also go up stairs in a chair, but I still need some help.”

The Craig Hospital provides its wheelchair students with a “terrain park” where they can work on skills such as navigating over curbs, speed bumps, stairs and gravel. Zack said he also learned how to “pop” his chair up to an upright position after falling over on his back.

Also during his stay at Craig, he learned to play tennis and basketball from his wheelchair. He also went swimming to improve his arm strength and cardiovascular stamina as well as doing a Scuba dive in a pool.

His father Jim said he is impressed by Zack’s progress since the accident.
“Zack has a long way to go yet, but he’s got such a great attitude,” he said. “He especially shines when people come over to visit.”

“Zack had over 250 visitors while he was in the hospital, including the whole Denver Christian soccer team who ran over for a visit,” she said. “And the support of the whole Grand County community has been so overwhelming.”

By Will Bublitz
Sky-Hi Daily News

Athlete’s comeback from paralysis will be told on TV tonight