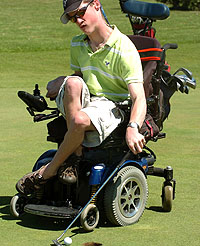 The Madame Lise Thibault Golf Tournament is in its eighth year

The sun was shining, the balls were flying and the chairs were rolling yesterday at the Fanshawe Golf Course Parkside Nine.

It was the eighth annual Madame Lise Thibault Golf Tournament, a three-person-per-team golf scramble for people with disabilities.

“The golf tournament takes its name from former lieutenant-governor of Quebec Lise Thibault,” said Mike Olizarevitch, golf pro at the club. “In a way that’s how it all started. I taught her lessons and showed her the course here, and she came down here to open it.”

The tournament has since been named in her honour. Thibault sustained a disabling spinal cord injury in a tobogganing accident as a teenager but she golfs every day, Olizarevitch said.

The city donates the course — the first in North America for people with disabilities — for the day, Olizarevitch said.

The course is flat and the greens are built on firm soil to allow a wheelchair to drive over them, he said.

And the players love it. Many of them return year after year, like Steve Mason of Thedford, who’s played in the tournament since 2000.

He said he found the course in good condition.

“It’s in good shape for me to wheel around in my wheelchair if I have to,” he said.

The tournament is sponsored in part by the Stroke Recovery Association in London, said Bev Regan, a therapeutic recreation specialist at Parkwood Hospital.

“We had a lot of people who wanted to golf again after their stroke, and young people with spinal cord injuries,” she said.

Eric Voss, 12, was there with a team from the Teed-Up Golf League. He said he came to the tournament “for the joy of playing golf.”

“It’s a comrade thing. They all play together,” said his dad, Matt Voss of St. Marys. “When they’re playing sports they forget about all their problems.”