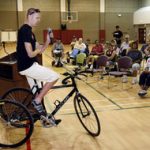 In a stop on a nationwide tour, he encourages others with disabilities.
Wiggling a single toe was the impossible goal Aaron Baker dreamed about achieving in 1999.

Nine years later and more than 1,500 miles into his trek, Baker is pedaling a specially made, three-wheel bicycle across the country to show others what it means to beat the impossible.

“I’m crazy enough to ride a bicycle all the way here from San Francisco,” Baker said.

With more than 2,500 miles to go, Baker rode through Tulsa on Tuesday as part of his Rise Above Tour to speak to members at The Center for Individuals with Physical Challenges, 815 S. Utica Ave., a center that has helped people with disabilities in Tulsa since 1959.

Baker and others in his three-person crew, which includes his mother, Laquita Conway, showed astonishment at the Tulsa facility and the opportunities it offered people with disabilities.

In all the cities they’ve been through since their start at the Golden Gate Bridge, Conway said, “you do not have anything remotely like this. It is amazing.”

Nate Waters, a member at the center who has a spinal cord injury similar to Baker’s, said he deals with times when he is depressed and asked Baker for his message to those who want to give up.

“Go through it. Ride it out,” Baker said.

Baker’s journey through Rehabilitation began after a wreck on the track as he was preparing for his first professional motocross race left him without use of his arms or legs, Conway said.

Diagnosed as a quadriplegic, Baker was told he might never even be able to feed himself again — much less ride a bike through Oklahoma on his way across America, Baker said.

But Tuesday was not Baker’s first trip through the Sooner State.

His mother, who was born in Chickasha, had purchased a farm in Wanette a year before Baker’s wreck. It’s where she had planned to build a practice track for Baker’s motocross career, she said.

Instead, soon after the wreck, Conway sold the farm and began the rehabilitation process with Baker.

Baker told members of the center that he is not promising a “magic pill” to get anyone through the therapy process or even that exercise will help, but his mission is to encourage others to stay proactive, he said.

“If I stop exercising I regress terribly,” Baker said. “It’s a downward spiral.”

Members at the center — including Waters — said they identified closely with Baker and his outlook on life with a Disability.

“He’s providing hope to everyone with different types of disabilities,” Walters said.

Stephanie Smith, a member at the center for more than four years, said everything about Baker was inspirational to her.

Lori Mathis, the center’s director, said speakers like Baker come to the center only about two or three times every year, so it is special for the members.

“It gives them the opportunity to meet someone who is out there doing it,” she said.