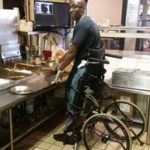 In honor of National Spinal Cord Injury Awareness Month, Vocational Rehabilitation shares the story of a man who was able to return to his career with the help of assistive technology.

Winter Haven, FL (PRWEB) October 10, 2017 Watching Othedus (Theo) Harvin at work in the kitchen at Sonny’s BBQ is like watching a graceful ballet. He moves from the grill to the refrigerator to the slicer and back again in one seamless motion. He pulls a lever to stand up so he can use the slicing machine or reach into the refrigerator, and he lowers the lever to sit down at the grill and get supplies. His movements are smooth and fluid as he maneuvers his wheelchair around the kitchen.

You see, Theo is paralyzed from the waist down. Surgery to remove a tumor on his spine left him with a spinal injury, but that doesn’t stop him now. He uses a stand-up wheelchair to get around. “I’m all over that kitchen. Man it’s easy,” he says. “I stand up to slice the meat and stuff. I can stand up the whole shift, if I need to. I’m used to standing in the chair now.”

Before the tumor and surgery, Theo had worked for Sonny’s for 13 years. But becoming paralyzed took a toll, and he stopped working. Then in 2008, he came to Vocational Rehabilitation (VR) and met VR Counselor Katie Kummer. VR is a federal/state agency that helps people with disabilities get or keep a job. Katie and Theo talked about what kind of job he wanted to do, but Theo had always been a chef and wanted to continue as a chef so, they decided that would be the way to go.

First, Katie was able to get Theo a wheelchair that would fit his needs – a stand-up wheelchair. Then, Theo attended the Hands On Education program, a two-week culinary program at the Grand Hyatt Regency in Tampa, Fla. He graduated with flying colors and came home to begin applying for jobs.

Theo worked at Outback Steakhouse for a year, but it didn’t work out, so he decided to call up his old boss at Sonny’s. “I went to talk to him, and started the next day,” says Theo. “I just had to prove to him that I could still do my work in the wheelchair.” He’s been back in the kitchen at Sonny’s ever since.

Zach Drehmer, owner of Sonny’s BBQ in Bartow, is glad to have Theo back in the kitchen. “I hired him because of past experience. I’d worked with him for 10 years before his surgery. But he’s the same person he was before. He has a positive attitude, doesn’t get stressed out, and always has a smile.”

Katie is thrilled that Theo is, once again, doing what he loves to do. “He is so happy in the kitchen and is just an awesome person! He recently came back to VR for a new stand-up wheelchair because the old one wasn’t working anymore. VR also modified his vehicle so that he could drive to and from work independently. I’m glad we could get it for him so he could continue working and providing for his family.”

“I’d worked with him for 10 years before his surgery. But he’s the same person he was before. He has a positive attitude, doesn’t get stressed out, and always has a smile.”

Theo is grateful for VR and Katie. “I appreciate VR. They really helped me out a lot. At one point, I thought I was just going to sit around and not do all the things I do now. Working with Katie was a blessing. She helped me get back on my feet. She’s like a second mom, and she really stayed on me. If it wasn’t for her, I don’t know where I’d be.”

The new wheelchair is working well for Theo and Sonny’s. He can move around the kitchen so much easier now, standing or sitting whenever he needs to. He’s back where he belongs, and that’s just fine with him.

About Vocational Rehabilitation
Florida’s Vocational Rehabilitation (VR) is a federal-state program committed to helping people with disabilities become part of America’s workforce. The employer-focused website, https://abilitieswork.employflorida.com/, allows businesses to search at no charge for employees who are ready to go to work, as well as to post available jobs. VR has 90 offices across Florida, and last year helped 5,194 Floridians with significant disabilities find or keep a job. For more information about VR and its services, call (800) 451-4327 or visit http://www.Rehabworks.org.