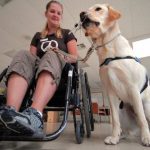 OCEANSIDE —- A former Marine Corps reservist disabled by a spinal cord injury says many similarly injured troops he talks to are reluctant to apply for assistance dogs.

“They still have that warrior mentality,” said Lance Weir, volunteer coordinator for Canine Companions for Independence in Oceanside. “They’re still looking out for that person next to them. Very often they’ll say they don’t want to take a dog away from someone else.”

Weir is working to dispel that notion.

He will introduce war veterans to assistance dogs during the nonprofit group’s open house for current and former members of the military and their families from 10 a.m. to 2 p.m. Aug. 9. The event takes place at the Canine Companions campus, 124 Rancho del Oro Drive.

“These guys need as much help as is possible,” said Weir, who was injured in a nonservice-related accident and has had an assistance dog since 2004. “We want to make sure that they know we are there for them.”

Of the more than 250,000 Americans with serious spinal cord injuries and disorders, more than 42,000 are war veterans, according to the Department of Veterans Affairs. The wars also have left hundreds of troops suffering losses of limbs, traumatic brain injury and hearing loss.

Canine Companions’ Oceanside operation places about 40 dogs annually, all golden or Labrador retrievers or golden-lab mixes, breeds whose intelligence and temperament make them best suited to be companion dogs.

“They generally have active lifestyles, decent upper-body strength and good cognitive skills, all qualities that make for a successful assistance dog placement,” she said.

Since its founding, Canine Companions has trained and placed nearly 4,000 dogs. Typical placements include those paired with special-needs individuals, adults with major physical disabilities, those with hearing loss and children and adults with developmental disabilities.

“For the veterans, we believe our dogs can help them transition successfully back to civilian life on both an emotional and physical level,” Malatino said.

Training the dogs can take two years or longer. For their first 18 months, they live in a foster home. They then spend the next six to nine months at the Oceanside campus or four other centers around the country working with trainers.

The dogs respond to about 50 commands, including opening doors, turning lights on and off and retrieving dropped items. Hearing dogs alert their companions to sounds such as knocks on the door and smoke alarms.

“It costs up to $50,000 per dog,” Malatino said. “But we don’t charge a dime for the breeding or the training. The only cost for someone who gets a dog, other than a $100 fee for supplies that go home with them, is the cost to travel to a regional facility for two weeks of training.”

Each of the centers has dorm rooms where recipients stay while training with their dogs.

Canine Companion staffers conduct follow-up visits with questionnaires with those who receive dogs and to offer custom command training that may arise once a person and dog are paired.

The organization has been working with Navy and Veterans Affairs medical centers in the region as well as Camp Pendleton groups to highlight the upcoming open house and to get out the word about the veterans’ initiative.

Some disabled veterans have already submitted applications, but Malatino could not specify how many.

“We just really want these vets to know that we can help them, and this is an organization you can work with,” he said. “With us, you gain a family, and I promise it is life-changing.”

Weir said he and Satine, his lab-retriever mix, are inseparable.

“I live alone, and I couldn’t do that without her,” he said. “She picks up items that I drop and helps me in a lot of different ways.”

For more about Canine Companions and access to an application form, visit http://www.cci.org/site/c.cdKGIRNqEmG/b.3978475/k.3F1C/Canine_Companions_for_Independence.htm or call the Oceanside center at (760) 901-4300.