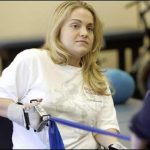 Christan Zaccagnino awoke at Xishan Hospital near Beijing with a roaring headache.

The 24-year-old Port Chester woman had just endured two hours of spinal cord surgery. Doctors transplanted cells above and below the spot in her spinal cord that was injured 14 years earlier in a diving accident. They hoped to restore movement and feeling to her paralyzed body.

Zaccagnino is among hundreds of people with spinal cord injuries and other debilitating afflictions who have placed their faith in Dr. Hongyun Huang, a Chinese neurosurgeon who has transplanted fetal brain tissue into the lesions of more than 400 such patients from across the world.

The controversial surgery has no documented success rate, and a recent American medical journal study advises doctors to warn patients against it.

But Zaccagnino ignored the skeptics and went to China in April. Five months after the surgery, she said she is showing some promising results in her strength and posture.

“These little things that I was never able to do -it’s not even six months and I’m already seeing changes,” Zaccagnino said recently. “I’m extremely happy with my progress. I couldn’t ask for anything more.”

Zaccagnino left for Beijing on April 18 with her father and her boyfriend, Army 1st Lt. Boyd Melson, after raising the $30,000 needed for the surgery through fundraisers and T-shirt sales.

Though the shabby condition of the Chinese hospital was startling at first, Zaccagnino said, she soon felt at home in her austere quarters – a small room with four concrete walls, two beds and a DVD player.

She was surrounded by patients from Greece, Italy, Romania, France and other countries, all awaiting Huang’s surgery. The families prayed together as their loved ones were wheeled into the operating room.

The day before her own surgery, Zaccagnino began to have second thoughts as nurses shaved off the back of her lustrous hair. She watched the blond strands – “the only thing not affected by the accident” – fall from the back of her neck and panicked.

“Those words kind of resonated,” Zaccagnino said. “I thought: ‘I have so much support behind me. I’m so blessed. I can do this.’ ”

The next day, she went into the operating room as friends and family back home attended a prayer meeting at her parents’ house in Port Chester. Zaccagnino calls the decision to go ahead with the surgery “one of the hardest things I’ve ever done.”

Huang normally uses cells from aborted human fetuses to implant into the brains and spines of patients, but Zaccagnino said because of her religious objections, he used stem cells derived from her own arm and leg for her operation.

Zaccagnino was 10 when she dived into her parents’ above-ground swimming pool, hit her head on the bottom, and broke two of her Vertebrae and injured her spinal cord. She was paralyzed from the neck down.

At the hospital, her parents were told she would never walk again, and, at best, might recover limited feeling in her upper body. But after intense Physical Therapy and training, she was able to move her arms, walk with leg braces and a walker, and pedal a stationary bike with assistance.

Fourteen years after her injury, Zaccagnino, a student at Iona College, hoped the surgery in China would help her reach her ultimate goal of standing and walking without braces.

American doctors expressed skepticism about Huang’s surgery in a 2006 article “Neurorehabilitation and Neural Repair.” The doctors observed seven spinal cord injury patients who underwent Huang’s surgery and said no significant improvements were found. Five of the seven patients also had complications like meningitis.

“The procedures observed did not attempt to meet international standards for either a safety or efficacy trial,” the article said. “In the absence of a valid clinical trials protocol, physicians should not recommend this procedure to patients.”

Attempts to reach Huang via e-mail and through a medical assistant were unsuccessful.

Despite his detractors, Huang entices patients to his surgery with his optimism and their sense of frustration with the slow pace of American medicine.

Chris Olson of Madison, S.D., had the surgery in September 2003, two years after he was paralyzed from the shoulders down in a car accident. He was the third known American to go to Huang.

“I wasn’t delusional to think that I would be restored to what I was before, but I was hoping to gain a little movement in my hand,” he said.

Olson, 29, said he did not get back the movement he had hoped for, but he found many small improvements encouraging. After the surgery, he could feel sensations lower on his chest, arms and hands, and some movement returned to his wrist muscles. He did not achieve his main goal of new movement in his fingers, but that did not sour him on his experience in China.

“For me, the hope was worth it and trying to get something instead of not trying was worth it to me,” Olson said.

Zaccagnino also said she has no regrets about the surgery, and hopes to act as a liaison for American families considering the trip to Beijing. She said she would recommend the surgery to others with spinal cord injuries.

Immediately after the operation, Zaccagnino said, she felt her calves and the back of her legs for the first time since the accident, and three days later she could clench her thighs. The surgery has helped her feel more in control of her muscles and body. She sits straighter and can regulate her body temperature more efficiently.

“I feel like the things that I see, it’s hard to show the average person,” Zaccagnino said.

Her personal trainer, Lindsay Huisman, who specializes in spinal cord injuries, said after the surgery Zaccagnino could push outward with her feet for the first time. Her legs, muscles and feet are more active, and she has occasional muscle spasms in the center of her stomach and obliques.

“The changes that I’ve seen are consistent on a timeline from when she had her surgery,” said Huisman, who trains Zaccagnino at Push to Walk, a Rehabilitation and recovery facility in New Jersey. “I’m not a medical doctor and I can’t say that it’s the result of a certain type of cell. I can’t say because I don’t know.”

Meanwhile, Zaccagnino and Melson are turning their attention toward other, additional treatments.

“We definitely already have little tricks up our sleeves,” Zaccagnino said. “We try to keep it to ourselves, but we’re looking into things.”

By LIZ SADLER
THE JOURNAL NEWS

Researchers are developing devices that can help restore bodily movement