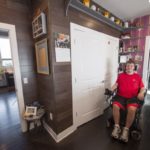 Every morning, Brian Keefer looks up at the framed words of encouragement covering his bedroom wall, and he smiles.

“Brian, you keep smiling because that’s what makes you so special! … Keep believing that you can fly!” one says.

“You’re my hero and inspiration,” reads another.

Those notes, written by friends and family, are Keefer’s favorite part of the room “Extreme Makeover: Home Edition” built for him in 2011.

By now, he has them all memorized, but he still reads them every day as a reminder of everything he’s overcome.

Just six years ago, life was very different for Keefer, now 30, after a gymnastics accident left him a quadriplegic in 2008.

He spent almost all of his time confined in one or two cramped rooms in his parents’ Newberry Township home because his wheelchair wouldn’t fit through narrow spaces and doorways to go anywhere else. He couldn’t even get into the bathroom.

It was tight quarters, he said.

His family didn’t have a wheelchair-accessible van, so he couldn’t leave the house or go see his friends. Sometimes, he borrowed a friend’s van. But, most of the time, he was stuck in the same room for hours every day.

In June of 2011, “Extreme Makeover: Home Edition” changed all of that.

In just one week, the show brought together hundreds of volunteers dressed in togas and blue and white face paint to help transform the Keefers’ awkward 1970s two-story family home into a rehabilitation paradise with a fully furnished living area just for Keefer.

Locals were eager to help, some even taking vacation to rebuild the house in the rain.

Take a look inside the home

Keefer now has his own bedroom, bathroom, kitchen, living room, guest room and therapy room complete with an indoor pool and underwater treadmill. He even has his own entrance so he can come and go without traveling through his parents’ house.

But, the “Makeover” gave him much more than his own separate wheelchair-accessible living space. It gave him more independence.

The bedroom, bathroom and therapy room are all connected by a track built into the ceiling with an overhead lift that, with a little assistance from his dad, can carry him from one room to another and help him get into his bed, shower and therapy pool.

The doors to his therapy room have motion sensors so he can roll right through them without any help, he said. And some of his other doors and gadgets are controlled by voice command.

“I can talk to the house and have the doors open so I can go right outside,” he said. “It makes it a lot easier.”

He also uses voice commands to raise and lower his bed and turn the lights and TV on and off. On his command, a 127-inch projection screen slides down in front of the doors to his therapy room so he can watch movies.

“It’s neat to be able to talk to the house and have it help me out,” he said. “Just being able to be more independent, that’s been the most helpful thing.”

Six years ago, Keefer knew this house was going to change his life. But he never could have imagined how much.

The therapy room, alone, has been a game changer, he said.

With his equipment close by, he can do three to six hours of therapy exercises every day. And, over the last few years, he’s started to notice that his hard work is paying off.

When he first moved into his new home in 2011, he could only move his left index finger. But, now, his left arm is strong enough that he can drive his wheelchair with a joystick.

Keefer is also getting a lot of core strength back, he said, enough to be able to sit up on the couch without any help. He’s also started getting “little flickers” in his leg muscles – not enough to move yet, but it’s something he didn’t have before.

“In terms of progress, that is a huge, huge step for him,” said Brian’s mom, Dawn. “It doesn’t seem like it, but when they said he wasn’t going to have any movement at all, to get that back, is huge.”

Possibly one of the best things “Extreme Makeover” has given Keefer, though, is an opportunity to share his story.

Since the episode aired in 2011, Keefer has heard from so many people who were inspired by his message, and he’s spent a lot of time traveling to churches, schools and other groups to share it with others.

“Everybody has different situations in their lives, challenges that come up – death of a family member, loss of a job, anything. And, I really want to just emphasize that life is about choices,” he said. “Do you choose to wallow in self-pity or do you choose to fight and become stronger and overcome these obstacles? … Because I am faced with this challenge of my spinal cord injury, and I’m pushing every day to overcome and fight it.”

But just because he has to work hard to overcome those obstacles doesn’t mean his life is over, Keefer reminds people. He’s had a lot of fun, too.

Since the “Makeover,” he’s learned how to scuba dive, coached a Paralympic volleyball team, met lots of new friends and given back to the community.

He also went back to school and graduated from Lock Haven University in 2012 with a degree in recreational management. He plans to use that degree to work with other spinal cord-injured patients in an aquatics program.

But, for now, he’s focused on his own therapy and getting stronger. His next goal is to achieve arm functionality, he said. He hopes to one day be able to brush his teeth, comb his hair, feed himself and maybe even use a self-driving car.

“I love my mom and dad, but I want to be able to get out sometimes on my own,” he said.

Keefer said he still doesn’t know who nominated his family to be on “Extreme Makeover: Home Edition,” but he wants whoever it is to know how thankful he is.

Looking back, he has no idea where he’d be without the show. Probably still stuck in one room in his old house, he said.

“It kind of hurts me to think about,” he said. “I wouldn’t have been able to help all the amazing people I reached out to … I can’t even think about what life would be like if (‘Extreme Home Makeover’) hadn’t come.”