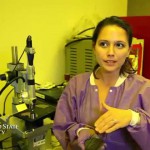 Researchers at San Diego State University and two other schools won a $15 million grant to continue their work on a brain chip that could help people with traumatic spinal cord injuries undo the effects of paralysis, it was announced Monday.

The work done by the SDSU researchers — along with teams at the University of Washington and the Massachusetts Institute of Technology — for the Center for Sensorimotor Neural Engineering is aimed at helping paralyzed people regain mobility.

The brain chip reroutes neural signals around the injured nerves, and a receiver picks them up on the other side.

In the U.S., more than 100,000 people have brain-implanted electrodes to help manage a number of diseases and conditions, including Parkinson’s disease and chronic depression, according to SDSU.

“Neural signals are electrical in nature,” said Sam Kassegne, professor and deputy director for CSNE at SDSU. “When the brain or spinal cord is damaged, those electrical signals can’t get through. There’s nothing wrong with the signal, but it’s being blocked.”

Kassegne said using implantable electrodes to restore motor function is equivalent to installing a detour in the brain-to-body communication system.

Kassegne said information is fed into a device that converts the electrical signal into a wireless transmission. A receiver in the functionally paralyzed limb picks up that information, converts it back into the original electrical signal as accurately as possible and stimulates the nerves, restoring function.

In 2011, the National Science Foundation awarded SDSU, UW and MIT an $18.5 million Engineering Research Center grant to establish the CSNE to research better ways to use electronic devices to pick up and transmit neural signals, as well as explore ways to make those devices safe, energy efficient and informationally secure.

Over the past five years, 13 SDSU faculty members and dozens of graduate and undergraduate students have made huge strides in several facets of the project, according to SDSU.

Mechanical engineer Kee Moon and colleagues have developed a method for powering and recharging implantable brain devices with ultrasound, a new and convenient method for providing power to implanted machines, according to the school.

Mieko Hirabayashi, a graduate student in Kassegne’s lab, said she hopes to change lives by working in brain-computer research.

“This is really my dream job,” Hirabayashi said. “I came here for the opportunity to work on medical devices for the brain. It was extremely exciting because it’s exactly what I want to do. And it’s the brain! Who isn’t interested in the brain?”

App helps spinal patients get their lives back