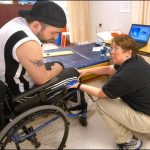 A new pressure mapping system at Sunnyview Rehabilitation Hospital that helps clinicians determine the suitability of a wheelchair cushion is making life a little easier for people with spinal cord injuries, including Douglas Bartling Jr., 30, of Little Falls.

Bartling, who was paralyzed in a diving accident last summer while on vacation in the Adirondacks with his fiancée and his family, started to develop a Pressure Sore on his buttocks last March.

“I came in, and used the pressure mapping, and I got a different cushion,” said Bartling. “I went home, used the cushion for the weekend and it got better, and I haven’t had another problem since.”

According to Patricia Valenza, a Physical Therapist at Sunnyview, pressure mapping is a thin mat, measuring approximately 18 by 18 inches that has 256 sensors for sensing pressure at different parts of the sitting surface.

“When a patient sits on the mat, the sensors read pressure at individual locations on the thighs and buttocks,” said Valenza. “This data is transferred to a computer, where we can analyze it and determine where pressure sores may occur.”
Educational tool

The system can also be used as a patient education tool.

“It allows us to show patients how much weight shifting they need to do in order to take the pressure off, which helps alleviate the risk for pressure sores and Skin Breakdown,” said Valenza.

Patients appropriate for mapping are people who spend a good part of their day in a wheelchair, such as individuals with spinal cord injuries, Multiple Sclerosis, stroke or brain injury.

It takes from five to seven minutes for the pressure readings to become accurate.

“The way it works is by colors,” Valenza explained. “Blue pressure is on the low end of pressure, green is getting higher, yellow, orange and red are the highest. You also want the distribution to be even. You want the pressure spread out over a bigger area to make less overall pressure in each area.”

The $7,000 system was made possible through a gift to the Sunnyview Foundation. Purchased in February, it has been used on about 15 patients.

Because Bartling sits up so straight, he pushes his weight to the back of his wheelchair. His new cushion has a small cutout at the exact point where he was getting pressure.

“So just switching to this little cutout here took all the pressure away and he healed up very quickly,” said Valenza. “All cushions are not equal. And one cushion will work for one person and not another. That’s why the mapping pressure system is so nice. It helps you look at each individual person.”

Based on the person’s injury, Valenza said, physical therapists have an idea what cushions would be most beneficial for each person.

“We narrow it down to a couple, and the mapping system helps us decide the best one,” she said. “It also helps us justify to insurance companies why certain wheelchair features would be most beneficial to specific patients.”

Studies show that pressure-sore rates are high in at-risk populations: 23 percent of all nursing home residents and 60 percent of spinal cord-injured patients develop a pressure sore at some time.

An advanced sore requiring hospitalization and surgery costs $70,000 or more, and between $3.5 million and $7 million is spent each year on the treatment of pressure sores.
Potential complications

Complications such as wound infections can occur, which increase healing time and can lead to other medical issues.

Even with the pressure-mapping equipment, its important for people in wheelchairs to have someone check their skin on a regular basis, “especially if you change anything in the cushion or wheelchair-seating system,” said Valenza. “Anytime you are changing the way someone is sitting, you are going to want to be more diligent in checking the skin for the first couple of weeks. “

Bartling, who is a quadriplegic, meaning he has Impairment in all four limbs, is paralyzed from the chest down.

Before his accident, Bartling, who is 6 feet, 5 inches, tall and weighs 255 pounds, was a construction worker. He has therapy at Sunnyview three days a week and at home two days a week.

He plans to return to school to get a degree in communications and is thinking about becoming a motivational speaker for people with spinal cord injuries.

“Everybody says I’m really positive,” he said. “I’ve always been that way. My faith keeps me going. It seems like I minister to other people who have new injuries. I like to help others.”

Bartling said he believes his injuries could have been much more extensive.

“I was under water so long — 20 minutes, I should have had a tracheotomy, but I didn’t need one” he said. “I never blacked out. I tried to push myself closer to shore, but my family thought I was just waving in the water. Finally, I went down and came up, and my face was bright red, and they came and picked me up and brought me to shore.”

He was then helicoptered to Syracuse.

A few weeks later, he was transferred to Sunnyview Hospital, where he spent two months.
Multiple goals

Bartling said he has several goals for his future.

“I want to give back what I can to help other people in my situation who aren’t positive,” he said. “I’ve seen families torn apart in this situation. I saw a wife never come in to see her husband and eventually leave him. I feel very blessed. My fiancée is still with me.”

But even Bartling admitted he has an occasional bad day.

“It’s hard to watch my fiancée mowing the lawn or shoveling the driveway,” he said. “That should be my job. But then I tell myself my injury could have been much worse. I could be on a respirator. So I am blessed.”

Bartling also wants to stand at the altar when he marries his fiancée, Sherry Comstock.

“We might have to wait for a while,” he admitted. “I don’t even mind if I have to wear braces, but I don’t want to be sitting at the altar.”