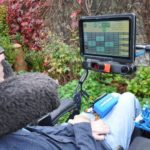 For quadriplegics, life can be extremely isolated. Those without the ability to control their arms, legs or head must rely entirely on a caregiver to move, or even turn around, their wheelchair.

One cause of quadriplegia is the neurodegenerative disease ALS, which afflicts an estimated 12,000 to 15,000 in the U.S., according to the CDC.

Because the disease is progressive, those afflicted can go from having completely normal motor control to being fully quadriplegic without the ability to talk, in the span of just a few years. Previously having the ability to move independently can make the loss of movement even more difficult for those with ALS.

The Eyedrivomatic—an add-on system that turns any electric wheelchair into a gaze-controlled wheelchair—was created to give those with ALS, and other quadriplegics, a little bit of their independence back.

“For these people that have late-stage ALS it’s very difficult for them to do anything. Just the absolute simplest job of moving from one part of the room to another unassisted is impossible,” said Cody Barnes, the software developer for Eyedrivomatic based in California, in an interview with R&D Magazine. “The whole point is to give a tiny amount of control back to these people.”

At the time of the system’s inception, both men used electronic wheelchairs, but while Joyce had some remaining movement in his fingers and was able to operate his, Evans only preserved movement in his eyes and relied on a caretaker to operate his chair. Both used an Eyegaze eye-tracking system to communicate, which allow users to look at specific letters and words, which are then read aloud by a computer. As it was created, the Eyegaze system was only intended to operate the computer, not the movements of the chair. The Eyedrivomatic changed that, interfacing with the chair-mounted Eyegaze system and physically moving the joystick.

In 2015, the Eyedrivomatic won the Hackaday Prize, a yearly U.S.-based engineering initiative designed to challenge inventors to build something that matters and changes lives.

In addition to receiving almost $200,000 as a result of winning the competition, Joyce and Evans also received something perhaps even better—a new partner to help them further their technology.

Barnes, a software developer, had recently experienced a personal tragedy that prompted him to contact Joyce and Evans.

“When I came across the Hackaday prize information it was a time in my life when my wife was coming off a very debilitating injury where she had used an Eyegaze system to communicate with me,” said Barnes. “She had regained the ability to speak and no longer needed it, but during that time— it was almost a year that she was in the hospital—I had seen a lot of the pain and misery of people in similar conditions and I gained a profound empathy for their positions.”

Barnes contacted Joyce to see if he could needed the extra Eyegaze system he had for testing. Joyce didn’t need it, but asked Barnes if he knew of any software developers that would be interested in helping them upgrade their device.

Barnes jumped at the opportunity to help and ended up building the software and firmware that is currently used today in the Eyedrivomatic. However, tragedy caused his role to expand significantly.

In April 2017, both Joyce and Evans died within weeks of each other. Today Barnes, along with the help of Evans’s wife Tracy Evans, is leading the Eyedrivomatic project in their honor.

“It is a very rewarding project to be on,” said Barnes. “It is something to think about, that there is a group of people out there right now that are using this to improve their lives in a very substantial way.  That brings a lot of pride.”

Because Joyce didn’t own either the wheelchair or the Eyegaze system he used (in the UK health services loans these technologies to patients) his idea was to make something that would interface with a user’s chair mounted computer, and physically move the joystick without any modifications to the hardware. He also wanted the technology to work with any wheelchair and Eyegaze combination so that patients with all different types of technology could utilize it.

The solution Joyce came up with is a two part system— a ‘brain box’, containing an arduino and four relays, and a 3D-printed “electronic hand,” containing servos to move the wheelchair’s joystick.

Software can be downloaded so that a user’s existing computer system incorporates buttons on the screen for forward, back, left and right, along with speed and duration of movement.

“The user could select, move for two seconds at walking speed for example, and then select the direction they want to go,” said Barnes.

Safety was essential in designing the software.

“The user has to be very explicate about their movement,” said Barnes. “The number one concern when doing everything is safety. The last thing we want is for someone to accidently drive himself or herself somewhere dangerous. So, there are all sort of safety aspects to prevent accidental button clicking or movement.”

While the system was mainly designed to allow users to move their wheelchair independently from point A to point B, many users have reported satisfaction with a much simple function it provides.

“We’ve been surprised to find that one of the greatest benefits of it has been simply to turn their wheelchair in the room, to look at something more interesting, to turn toward the television and watch TV, to be able to watch their kids, or tilt back to relieve pain,” said Barnes. “If you can imagine this, you are not able to talk, you are not able to move, and you are sitting there for hours in pain because you are in an uncomfortable positon. Now with this technology they are able to tilt the chair back to relieve a bit of pain or move themselves into a room that someone else is in and let them know, using their existing Eyegaze technology, that they need help.”

The core focuses behind the Eyedrivomatic is to create assistive technology that is accessible to anyone. In addition to being created from technology most quadriplegics already have, the software has from the beginning been open source, so that anyone could download it and create their own at home.

The team has also offered interested parties the ability to buy a pre-assembled system to attach to their wheelchair for a low cost.

Right now, Barnes and Evans are looking to scale up the manufacturing of the Eyedrivomatic so that it can be available to more people. Due to that goal, the software is temporally not available for download while he works out some liability issues. He is in the testing phases of version 2.0 of the software and plans to approach manufactures and distributors for a potential licensing agreement in the near future. Although he hopes to produce the Eyedrivomatic on a larger scale, it will not lose its accessibility, he said.

“It is our intent to keep the open source, or at least very accessible, aspect of this project,” he said. “It is likely that we will be licensing this in the future, for the purpose that it becomes available to more and more people. The fear is if we keep it a small project that it just won’t reach enough people. About 1,000 people a year are diagnosed with ALS in the U.S. alone, and if we are only putting out handful of units per year that is just not covering what we set out to do.”

“The idea isn’t to get rich of this project, he added. “The idea is to take these folks that are in very unfortunate situations and give them the ability to get a little bit of control back in their life.”

Is it time for true equality?