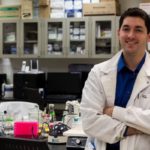 Stewart chose spinal cord injury research in 2009 after his brother was involved in an accident that damaged his spinal cord and left him paralyzed in a wheelchair.

“He had fallen from a third-story balcony onto a concrete slab,” Stewart said. “That’s what moved me to pursue a career in research to find a cure for spinal cord injuries.”

Stewart is in the neuroscience program of the College of Humanities and Social and Behavioral Sciences. He is planning to graduate in May 2018 with a doctorate in neuroscience.

Stewart received his bachelor’s degree in kinesiology in 2012 from University of Michigan and came to Central Michigan University in 2013 to begin graduate research.

Dunbar said undergraduate and graduate students work together in the lab, learning about neurodegenerative diseases like Huntington’s disease, Parkinson’s disease and Alzheimer’s disease. They also focus on other neurological problems like traumatic brain injuries, spinal cord injuries and brain cancer.

In his research, Stewart has been using genetically-altered stem cells to increase production of a protein that stimulates the growth and regeneration of axons, which allow communication between the brain and the body. When the spinal cord is damaged, communication is disrupted at the site of the injury. This can cause loss of feeling and movement. His goal is to restore that communication.

Stewart attempted to treat spinal cord injuries in rats by transplanting these genetically-altered stem cells at the site of the injury. He said he saw a lot of axons grow into the transplantation site.

Some rats regained function in the spinal cord. He is unsure whether or not the regrowth of axons and the restoration of spinal cord function were related. His research is now focused on finding out.

Stewart said he chose to be part of FNI because he liked “the sense of cohesiveness amongst the students.” Even though students are working on their own projects, there is a large amount of collaboration that happens in the lab.

Rossignol explained the challenges Stewart faced when he first came to CMU. Stewart was dead set on doing research on spinal cord injuries, but his professors didn’t have much experience in that subject. He had to do a lot of work on his own and had to learn as he went.

“(Stewart) has a huge interest in the spinal cord, which is a little out of our expertise. He took the time to learn everything he could and we learned with him,” Rossignol said.

Stewart has been a first author on several publications regarding his research projects and co-authored on some others, Dunbar said.

Currently working on his doctoral dissertation, Stewart is attempting to find a way to get the axons to grow enough to reconnect the spinal cord at the injury site.

After graduating from CMU with his doctorate, Stewart plans to continue post-doctoral research at another university in the Midwest. He said he is looking at a few, but hasn’t made a decision yet.

Rossignol said Stewart is extremely dedicated to his work.

“I am amazed by the amount of work he does,” Rossignol said. “He doesn’t count his hours. He is always working.”

27 years later: Bice serves as inspiration to all