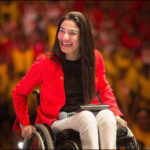 You might have come across her inspirational speech being shared online, in which she talked about how her husband jumped out of the car and saved himself while she survived with grave injuries in a horrific car accident.

The story she tells is compelling and moving, with over a 100 million viewers and counting as people all over the world responded to her inspiring message of overcoming the odds despite immense obstacles that life has dealt her.

Often referred to as Pakistan’s Iron Lady, Muniba Mazari’s amazing story about her journey back from massive spinal injuries that left her bedridden for two years is incredibly moving, so much so that she has found international acclaim as a TV host and United Nations goodwill ambassador.

Her moving speech about how she found healing through art therapy, finding the courage to leave her husband and accepting that she could never have children after the accident and resolved to adopt instead had gone viral since October last year.

However, her new found fame has also brought some unforseen backlash in the form of her ex-husband suing her for defamation and now, even accusations of her plagiarising another artist’s work and even earned the ire of the Disability Movement of Pakistan.

Her ex-husband Khurram Shahzad, a former fighter pilot of Pakistan Air Force, had filed a defamation case against her for “blaming and bashing him for all her afflictions”, reported The Nation.

Muhammad Atif Sheikh, president Special Talent Exchange Program (STEP), an NGO which advocates for the rights of persons with disabilities had found offence in how Mazari had painted her husband in such a bad light in her viral speech.

Sheikh said that Mazari was demonising the name of the country by showing that men don’t respect women in Pakistan which wasn’t the truth, Daily Pakistan (DP) reports.

“She shouldn’t be an ambassador of disability for any organisation because a representative/ambassador always advocates the right-based approach and equality, not try to gain sympathy. Disability is a diversified way of living, not a brave struggle,” said Muhammad Atif.

He continued, “She is trying to get attention using the charity model of disability, which is entirely wrong and isn’t what a representative should do.”

Mazari, who was also named one of BBC’s ‘100 Most Inspirational Women’ and is the first Pakistani to make it into Forbes’ 30 Under 30, has been wheelchair bound for the last seven years after the car accident at the age of 21 that left her with an irreversible spinal cord injury.

Since then, she has become the voice of women, men, girls and boys across Pakistan, bringing the world’s attention to issues of gender inequality and discrimination that are still rife in the country.

Despite the negative backlash, it cannot be denied that Mazari has served as an inspiration to many who can identify with her sense of losing hope when faced with extreme adversity.

Watch the video for yourself below.

Nosing Your Way Around