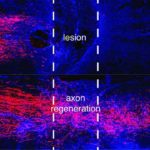 In a collaboration led by EPFL (Ecole polytechnique fédérale de Lausanne) in Switzerland and UCLA (University of California at Los Angeles) in the USA, scientists have now understood the underlying biological mechanisms required for severed nerve fibers to regenerate across complete spinal cord injury, bridging that gap in mice and rats for the first time.

The adult mammalian body has an incredible ability to heal itself in response to injury. Yet, injuries to the spinal cord lead to devastating conditions, since severed nerve fibers fail to regenerate in the central nervous system. Consequently, the brain’s electrical commands about body movement no longer reach the muscles, leading to complete and permanent paralysis.

The solution targets three components for nerve fiber growth to occur. Without one or the other, the recipe simply does not succeed in regenerating new axons in the spinal cord.

This three-pronged recipe was designed to reproduce the conditions underlying the growth of nerve fibers during development, leading to a robust regeneration of severed nerve fibers through and beyond a complete spinal cord injury.

“Our aim was to replicate, in adults, the conditions that encourage the growth of nerve fibers during development. We have understood the combinations of biological mechanisms that are necessary to enable severed nerve fiber regrowth across complete spinal cord injuries in adult mammals,”

By analogy, if nerve fibers were trees, then the terminal branches of the axons can be viewed as the tree’s branches. If the main branches of the tree are cut, little branches may sprout spontaneously along the remaining trunk of the tree. But the cut branches do not grow back.

The same is true for neurons in adults: new branches of severed axons can sprout and make connections above an injury, but the severed part of the axon does not regrow. The 3-pronged recipe uncovered by the scientists changes that, making it possible to regenerate entire axons.

To recreate the spatiotemporal conditions of a developing nervous system, the scientists deliver a sequence of growth factors, proteins or hormones, to fulfill the three essential parts of the recipe: reactivate the genetic program for axons to grow; establish a permissive environment for the axons to grow in; and a chemical slope that marks the path along which axons are encouraged to regrow.

Within 4 weeks, the axons regrow by several millimeters 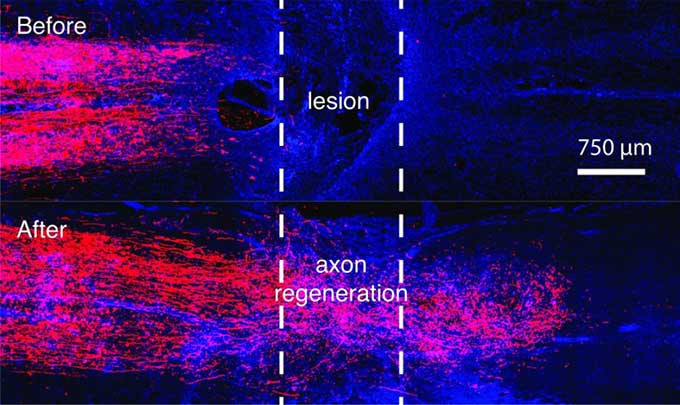 The new axons are able to transmit electricity – and thus neural signals – across the lesion, but this regained connectivity is not enough to restore walking. The rodents remained paralyzed, as anticipated by the scientists, since new circuits are not expected to be functional without the support of rehabilitation strategies.

“We dissected the mechanistic requirements for axon regeneration in the spinal cord, but it doesn’t translate into function. Now we need to investigate the requirements so that the axons make the appropriate connections with locomotor circuits below the injury. This will entail rehabilitation with electrical stimulation to integrate, tune and functionalize the new axons so that the rodents can walk again.”

Speculating about applications in humans is still premature. For example, the first component of the recipe that stimulates the grown of neurons happens two weeks before injury, so for now, more research must be done for the recipe to be clinically translatable.