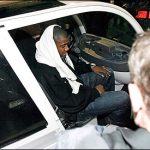 “I was speechless, on the verge of tears. It was hard to say something to him,” the rookie quarterback of the Buffalo Bills said. “He got out of his wheelchair and had a smile on his face. I remember the last time I saw him he was out here on the field with his head down getting in an ambulance, and we were all gathering around saying a prayer for him.”

Less than four months after sustaining a severe spinal cord injury on the turf at Ralph Wilson Stadium, Everett made a triumphant return Sunday to the scene of that awful September day when the 25-year-old tight end’s career ended in the blink of an eye.

Everett addressed his teammates about two hours before their afternoon game against the New York Giants, going locker to locker to begin an emotional day along the blustery southern shore of Lake Erie.

“I couldn’t stop looking at him,” Edwards said. “It’s very remarkable, and I’m not surprised that a guy that strong can get through an injury like that, both physically and mentally. That says a lot about the individual he his.”

Everett’s appearance marked the latest step in a remarkable recovery. Doctors initially feared Everett would never walk again after what was described as a life-threatening injury suffered while making a tackle on Domenik Hixon on the second-half kickoff in the season opener against Denver on Sept. 9.

Everett was paralyzed from the neck down when he arrived at Buffalo’s Millard Fillmore Gates Hospital and spent the first few days on life support.

Hixon, who now plays for the Giants, was whisked away to meet with Everett after the Giants won 38-21 .

“It’s a blessing,” Hixon said. “I just want him to make a 100 percent recovery. I’m going to continue praying for him, and he’s going to make it back 100 percent.”

After meeting with his teammates, Everett left the locker room in a wheelchair and, on his own power, climbed into a covered electric car. He was driven to team owner Ralph Wilson’s suite at midfield.

When he arrived at the suite, Everett was immediately recognized by fans and concession workers, who began applauding as he exited the vehicle. Everett smiled and waved but didn’t say anything.

That Everett’s improbable return came just two days before Christmas made the moment even more poignant.

Everett, accompanied by family and friends, parked at one end of the box’s front row and watched the pregame festivities from a wheelchair, munching on a candy cane and acknowledging fans with a wave.

A smile creased Everett’s face when fan Rick Rosenswie of nearby Olean walked past and gave him a thumbs-up before taking his seat overlooking the 20-yard line at the west end of the field.

“Everybody wants to see him and welcome him back. It’s absolutely amazing that he’s back. Anybody that’s ever played knows injuries like that are catastrophic,” said Rosenswie, who played offensive line in college at St. Leo’s in the 1970s. “We saw him go down. We heard the hit from up here.”

Everett, who has spent the past 21/2 months rehabbing in Houston, where he makes his offseason home, was not available for interviews.

Everett returned to Buffalo at the invitation of the team, and Nike paid for a full-page ad honoring him in Sunday’s Buffalo News with this simple message: “9/9/07 Kevin Everett is carted off the field with a spinal cord injury. 9/10/07 Medical experts say there’s only a 5-10% chance that he will ever walk again. 12/23/07 Kevin walks back onto the field today.”

Everett did not go on the field to address the fans during halftime because of the inclement weather. Winds were already gusting at more than 30 mph and there was a persistent drizzle falling two hours before gametime that changed to an icy, wind-driven snow as the day wore on.

“I played ball myself. I understand the violence of the game,” said Mark French of Saratoga Springs, a lineman at West Virginia in the late 1980s who was at Sunday’s game with his 11-year-old son Nicholas. “It’s an awesome thing that he has the will and fortitude to actually get himself back on his feet and move on.”

Everett also was reunited with Bills team doctors, including Dr. Andrew Cappuccino, the team’s orthopedic surgeon, who immediately attended to the player on the field when he was hurt and operated on him.

“What a great testament for our nurses and doctors seeing him,” Millard Fillmore Gates hospital spokesman Mike Hughes said. “He is a shining example of their great care. And we have a standing offer to Kevin and his family to visit anytime. The staff here would love to see him again.”

Though the Bills have been eliminated from the NFL playoffs and self-destructed after a strong start against the Giants, nothing could put a damper on the day.

“It was absolutely a great gift to see Kevin and to have him back with our football team,” Bills coach Dick Jauron said. “To be able to see him and shake his hand, it’s hard to describe what it means to all of us and how lucky we feel to have it going like this.”

“I got to hug him,” Bills tailback Marshawn Lynch said. “That’s good for the heart.”