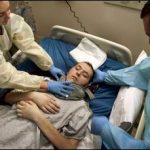 Spinal cord and brain injury patients routinely are staying at hospitals for weeks after they are ready to go to Rehabilitation, causing trauma centers to run at capacity and ring up costly bills.

Trauma patients are surviving in cases when they might not have a few years ago, and there is a shortage of rehabilitation centers to treat them. The situation ends up affecting everyone who needs medical care.

“If you are trying to get into Vanderbilt and the hospital is completely full, you may not be able to get in here,” said Dr. John A. Morris Jr., director of Vanderbilt University Medical Center’s division of trauma and surgical critical care. “If we could solve this problem, we estimate that we would save 3,000 to 4,000 bed days each year.”

Such hospital stays are much more expensive than typical rehab. The extra costs, health experts say, ultimately are passed on to all health-care consumers.

After people are hospitalized for traumatic injuries, they often go to inpatient rehabilitation facilities or nursing homes to receive therapy to improve their mental or physical function and learn to live independently with their injury. Some won’t be able to function without 24-hour care and will live in nursing homes indefinitely.

Katherine Moffat, director of communications for the Tennessee Health Care Association, said some nursing homes aren’t equipped to deal the complex needs of these patients, or find it too costly to care for them.

Chase McDaniel, paralyzed from the neck down after a car accident, has been trying to get into rehab for nearly 45 days. The 19-year-old Lebanon man remains at Vanderbilt because he has nowhere else to go.

Nicoll Doramus, his social worker, has tried to get him into about 15 facilities around the state and one in Atlanta. Doramus says she has been told that his needs are too complex to handle, which she doesn’t understand because he doesn’t require a Ventilator to breathe and his biggest need is help getting in and out of his wheelchair.

McDaniel said he has regained some feeling in his hand and recently has been able to turn his right arm but thinks he could be making more progress if he were in rehab.

“If I was in rehab, there’s no telling how much movement I could have back by now,” said McDaniel, who has TennCare, the state’s insurance program for the poor and disabled. “I might be moving my arms, if I could work with somebody to strengthen them.”

No one is tracking how the trend is affecting Tennessee hospitals in cost and overcrowding, according to Craig Becker, president of the Tennessee Hospital Association. However, Becker said he’s hearing anecdotally that hospitals across the state and nation are experiencing the same problem.

But he said all hospitals are affected. “Probably every CEO in the state has a horror story about one or more patients that they couldn’t find a (rehabilitation) bed for that ended up costing that hospital hundreds of thousands of dollars,” Becker said. “There was a fellow up at Sumner Regional (Medical Center). They called him the million-dollar man because that’s how much they spent on him.”

“We have had people who we have been unable to place and they have stayed in excess of 100 days,” Morris said.

Such hospital stays cost roughly $3,000 a day, which is much more expensive than care in a nursing home.

“Even if a person has insurance, it won’t cover all the costs,” Becker said.

“The hospital ends up covering most of those unpaid costs, but the way they do that is by raising the rates on commercial insurers, and they pass along those increases to individuals.”

Nursing homes are reporting that there are two groups of people who are especially hard to care for: those on ventilators and those with brain injuries.

“Some of them could exhibit violent behaviors,” she said. “Nursing homes don’t want to put other residents at risk.”

The other group that’s difficult to place is people who require a ventilator to breathe. Moffat said ventilator care is very expensive, about four times the typical Medicaid reimbursement rate of $135.14 per day.

There are also stringent staffing requirements for ventilator care. Nursing homes have to have a full-time respiratory therapist to care for those people.

“Not many facilities have a full-time respiratory therapist,” she said.

Moffat said that Medicaid reimbursements for ventilator patients need to be re-examined in order for more nursing homes to accept these patients.

While it’s unclear just how many trauma patients are in need of rehab services each year, Moffat said the bulk of nursing home patients younger than 60 are accident victims who have suffered spinal cord or brain injuries.

There were nearly 1,000 more people under 60 living in Tennessee nursing homes in 2005 than 10 years earlier — 2,814 compared to 1,862, according to data from the state’s department of health. That’s about 9 percent of nursing home residents.

McDaniel says the growing group needs to be better served.

“I’m angry,” he said, of not being able to go to rehab. “There needs to be somewhere for us to go.”

Facebook
Twitter
Email
Mix
Digg
Previous articleOctober is Breast Cancer Awareness Month and time to remember that even women with spinal cord injuries are at risk.
Next articleCourt to decide if stem cell surgery is covered

Paralysis Victim Uses Record Jury Award to Give Back