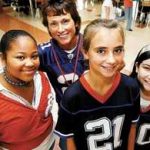 LOCKPORT — While most children may be thinking about tricks or treats this month, many Emmet Belknap Middle School pupils have been preoccupied with the serious spinal cord injury suffered last month by Buffalo Bills tight end Kevin Everett.

The school’s sixth-, seventh- and eighthgraders and their teachers are so concerned about the severity of the injury Everett suffered in the Bills season opener against the Denver Broncos that they’ve been raising money to donate for spinal cord research in Everett’s honor.

As of last Friday, Student Council President Dominique C. Wroten, a 12-year-old eighth-grader, said her school — students and teachers — had collected about $300 for the cause during the month of October. The campaign is slated to end today.

“When we heard about it, we wanted to raise money for him and for other people who suffer spinal cord injuries,” Dominique said. “I thought it was a nice idea to help people who need it. I know if I had a spinal cord injury, I would want all the help I could get.”

Assistant Principal Bernadette Smith said the money will be sent to the Miami Project to Cure Paralysis, a medical research group that has been developing treatments for those with spinal cord injuries.

Smith said the group’s work is part of the reason Everett may be able to recover and hopefully lead a normal life.

Special-education teacher Sherrill A. Maier, who came up with the idea, said the campaign was partly fueled by making every Friday in October “Bills Day,” with pupils and teachers wearing Buffalo Bills apparel to school and donating money to the cause.

When she suggested the idea, Maier said the pupils took charge of the campaign.

Pupils have been donating daily, and teachers have been required to donate $5 if they’ve wanted to wear their Bills cloth – ing to school on Fridays.

“Everyone’s pretty good about it and wants to help out,” Dominique said.

She goes around the lunch tables during her eighth-grade lunch period while Jessica L. Mullane, 12, a seventh-grader, does it for her class’ lunch period. Kennedy R. Smith, 11, collects from fellow sixth-graders.

“I wanted to do it because [Everett] needs all the help he can get right now. And we want to help find better ways to help people recover from spinal cord injuries they might suffer in the future,” Jessica said.

Maier said the Everett campaign has worked well and fits in with Belknap’s character education program, in which pupils are taught to be responsible members of the community who are involved with helping others. She said they are taught to be generous, giving and caring about others, and to recognize that doing good for others is its own reward.

“It shows there are a lot of kids in this school who have great hearts and are willing to give money to a good cause without being told to,” Maier said. “This campaign is voluntary, not mandatory. If someone buys lunch for 75 cents and they have a quarter left over it’s nice to see them put it in the donation bucket instead of buying that extra bag of chips.”

Smith, the assistant principal, said it was a timely project that shows students every person can contribute to making the world a better place.

“This has been good because there has been a lot of positive news about how advances in spinal cord research have been applied to [Everett’s] injury and how he’s able to stand and move, and is making progress,” when at first it was thought he’d never recover, Smith said.

“People often ask ‘What can I do?’ ” Smith said. “For our kids, this is an example of what anyone can do. You can organize. You can help. Even with limited resources there’s still something you can do no matter who you are.”