After Arquevious Crane was transported from the intensive care unit via a stretcher to his room at The Shepherd Center Thursday, the fallen South Gwinnett football player showed just where his mind is on overcoming his debilitating spinal cord injury.

Placed by staff on a bed, the 16-year-old Crane immediately asked to be placed in a wheelchair. To Dr. Donald Peck Leslie, that action was significant.

“It meant he doesn’t want to lie in bed and not pay attention to what he has to do,” Leslie said. “His family tells me he’s a very focused young man, and that will help him tremendously.”

Focused and spirited. When Leslie referred to him as “Mr. Crane,” the 16-year-old responded: “Please call me ‘Q.’ ”

“His eyes were wide open and he looked me directly into my eyes and spoke directly to me,” Leslie said. “He’s very stable. Very healthy.”

For the first time since he went down in a junior varsity game against Buford on Sept. 20, details of the magnitude of Crane’s injury were outlined in a news conference at The Shepherd Center, where he was transferred Wednesday.

Leslie said Crane broke two Cervical Vertebrae in his neck — C5 and C6 — which has left him paralyzed essentially from his chest down. Crane has “partial use of his upper extremities and some bicep usage,” meaning he can shrug and move his head. But there is no movement or sensation below the injured area.

While at Children’s Health Care at Scottish Rite, Crane underwent surgery to fuse the two broken levels of the spine, Leslie said. 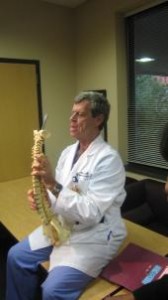 He will remain in a hard collar around his neck for four-to-six weeks, which is about the anticipated length of his stay at The Shepherd Center.

“I don’t know how this could have been prevented other than not going onto the field,” Leslie said. “The prognosis is that we have to see what changes he makes to get stronger. Right now he’s in very little pain. He’s comfortable.”

The doctor revealed that Crane momentarily was unconscious after the hit — “about 10, 15 seconds,” he said — and eventually will undergo CT scans as a precautionary measure to assure there was no brain injury, although “there is no indication of brain injury,” he said.

Crane can speak softly and can eat on his own

now that a tube that was placed directly in his stomach to feed him has been removed.

But there is much more work to be done. Unless there are more improvements, Crane could be confined to a wheelchair the rest of his life, Leslie said. But because he is a young athlete in good physical condition — and has an upbeat attitude and great family support — his condition could improve. But Leslie was careful to not make any predictions, as recovery from catastrophic injuries are virtually impossible to predict.

“Attitude is very important and he has a great one,” Leslie said. “We have a big job to do. But the biggest job is his.”

By CURTIS BUNN
The Atlanta Journal-Constitution

Paralyzed Veterans of America highlights the UnstoppABLE spirit of veterans in...