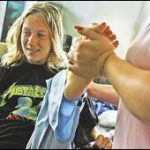 Five years ago, Danielle Shine became a quadriplegic after a car accident. Now, she hopes to raise money for an experimental stem cell transplant in Portugal.

Newton, Ia. – Danielle Shine saw a TV news report not long ago that featured a man who set up a Web page for donations toward his credit card bill.

She figured her situation was worse than credit-card debt. So she built a My Space page: “Quadriplegic with family needs hope to walk again.”

In September 2002, Shine, 26, was in a car wreck. Her spinal cord was damaged, leaving her a quadriplegic. She was 22 weeks pregnant.

Dylan was born three months later. She calls him the “miracle child” because doctors told her his chance of survival was questionable.

Shine can’t take care of herself, Dylan or his 9-year-old brother, AJ, her son from a previous relationship. She has limited movement in her arms but none in her fingers. Her finance, Eric James, quit his job and cares for the family with the help of in-home nurses.

Today, Shine hopes for another miracle.

At least six Iowans have traveled to Portugal, where Dr. Carlos Lima has performed an experimental procedure using adult stem cells, which is not legal in the United States. He extracts stem cells from the patient’s nose and transplants them to the site of the spinal cord injury.

Four Iowans who had the surgery report increased function. One is Amy Foels, 22, of Elkader, who couldn’t walk after an accident but in the two years since the surgery has gained the ability to walk using a walker.

A research paper on the medical trial of olfactory mucosa autografts in spinal cord injuries, published in the Journal of Spinal Cord Medicine, reported that subjects had increased sensation and movement in upper extremities after the surgery.

The problem for many patients is the $50,000 fee, which typically isn’t covered by insurance and doesn’t include the cost of lengthy rehabilitation. Shine doesn’t have the money. She’s a former telemarketer.

She and her fiance and two children live on $1,200 a month from her Disability payments and his payment from a federal and state program for caregivers of disabled people.

“I’d be the happiest person in the world, even if I had use of one hand,” Shine said. “I could take care of my kids. I could clean and cook and take care of myself. And we could get married.”

The couple lives in a modest home in Newton. A baby monitor allows her to call for James, which she did several times during a recent visit.

“It takes a lot of patience, but it’s what I get up for every day,” James said. “It’s my job. Not too many people are fortunate enough to spend as much time with their family as I do.”

James said that Shine “has her days, but keeps her head up.”

It hasn’t been easy on their relationship, but he tries to unwind with an annual family hunting trip and by tinkering in the garage.

Family members have set Shine up with a computer and games that let her use the side of her hand to move and click a mouse. She likes to play “Makeover Madness,” a game in which the player switches and matches outfits and hairstyles on women.

She watches the Disney Channel a lot with her kids and goes along with the boys’ selections of pro wrestling and “American Chopper,” although she sneaks in episodes of “Days of Our Lives.”

Shine wants more out of life. She was an active woman, she said, playing soccer and football with AJ before her accident.

But on a fall night in 2002 she got a ride home from work with a friend, whose car spun off the gravel, hit an embankment and rolled over.

“She is lucky she lived,” said her attorney Corey Walker. “An officer got there quickly and held her neck because she was having trouble breathing.”

The driver didn’t have insurance. Walker said Shine was covered by $50,000 of uninsured motorist coverage, but that only took care of a fraction of medical expenses. Shine won a civil suit against the driver, “but it’s not worth the money it’s printed on,” Walker said, because the driver has paid nothing.

Doctors asked Shine if she wanted to continue the pregnancy during her 28 days in intensive care. She had no doubt.

Dylan was born on Dec. 28, 2002, weighing four pounds. Although the boy was so small that James, the father, could hold him with one hand, the child has had no lasting medical problems.

But would the relationship with her fiance survive?

“When I came to, I knew he would be with me,” said Shine, her bright blue eyes shining.

“I did question myself. I asked myself, ‘What if he gets tired of you?’ But he’s too good a man. He’s got too big of a heart.”

Shine can flex at the elbow, has use of some shoulder and bicep muscles, but has no grip. She uses a motorized wheelchair and her motionless legs, accented with brightly painted toenails, lie over the chair’s supports.

She found hope after hearing of the experimental procedure that had helped Foels. The news had spread to other Iowans who are quadriplegic or paraplegic. One by one, they began raising money to go to Portugal.

Lee Harris, an Iowa State University student, raised $120,000 with auction dinners, fundraisers and $5,000 from an online site to get the surgery in September, 2005. He has noticed increased strength in his abdomen and back and is more stable in the chair.

“For years there has been nothing promising until this came about,” said Todd Troll, of the Iowa Clinic’s Physical Medicine and Rehabilitation in Des Moines. “It’s exciting for me to have something to tell my patients – that there is some success.”

He said even small changes, such as regaining grip in one hand, can improve their lifestyle.

Foels has done more: She can put full weight on her legs without braces.

“If anyone were to watch it, it would blow their mind,” she said.

His patients look on Lima as a kind of savior, a man working in relatively spartan Egas Moniz Hospital in Lisbon.

He said he has performed the procedure 110 times with patients from across the world in the last six years. Many are from the United States, and word of mouth has led a handful of Iowans to travel to Portugal.

“I’m the only one in the world doing it but we are teaching people from Greece, Colombia and Japan. It’s difficult to do safely,” he said.

Lima said the first phase of the medical trial is completed and in the next phase he will focus on analyzing the outcomes.

He said it could take more than five years after the surgery to realize the full outcome of the procedure.

The procedure is often confused with the controversial embryonic stem cell procedures that use fetal tissue. The tissue in this procedure comes from the patient’s upper nasal cavity which contains cells with regenerative potential.

A handful of U.S. rehabilitation centers work closely with Lima, including the Center for Spinal Cord Injury Recovery at the Detroit Medical Center.

Six Iowans who have had the surgery traveled to Michigan for a rigorous regimen of physical therapy three hours a day, five days a week.

Brian Sheridan, an Occupational Therapist at the center, has worked with Lima’s patients for 2years, and every one has made improvements in sensation and muscle strength, he said.

“Beyond the small research sample, it isn’t anything but anecdotal reports,” Sheridan said. “The improvement could be the result of the intense rehabilitation.”

Shine is ready to do anything she can, although Lima and the other Iowa patients are careful to tell her not to hope for miracles.

But Dylan and AJ grow excited. AJ often talks about the days when his mother could walk.

Together, they often watch her favorite movie, “The Wizard of Oz.” It speaks to being satisfied with what you have and overcoming fear, but also to the power of closing your eyes and hoping.

Paralyzed Man Regains Use of Arms and Hands After Experimental Stem...