Pamela Bell has been disabled for more than three years. 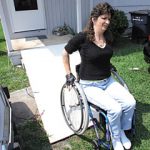 When a spinal cord injury eventually made the Jacksonville resident wheelchair bound a year and a half ago, Bell found herself living in an apartment not properly devised for her new situation.

On a fixed income, Bell said she has had to look everywhere for assistance to help modify her home. When all hope seemed lost, she found help in the city of Jacksonville’s Community Development Division.

But when the division’s extended promises of a free wheelchair access ramp turned into a $4,500 bill, Bell decided to file a complaint against the city.

“They said they could build me (a ramp); I had been qualified to have the ramp be built for a forgiven amount on a HUD grant,” said Bell, 44. “I still have no ramp.”

According to the Americans with Disabilities Act, a landlord is not responsible for providing handicap accommodations if the tenants’ Disability began after the lease was signed.

Since Bell – who lives in Town Center Apartments off Onslow Drive – was not in a wheelchair until after the lease began, her landlord is not required to build a ramp or provide any type of special accommodations, Bell said.

Bell submitted an accessibility complaint to the Mayor’s Committee for Persons with Disabilities last week, hoping the organization might reverse the community development division’s decision.

“I feel I have been treated badly by the city of Jacksonville and plan to contact whoever else I need to (in order) to keep this from happening to other residents,” Bell wrote in her complaint letter.

Bell said she applied for city assistance in October, and after considerable delay she, the Community Development Division and her landlord finalized paperwork for the free ramp last week. But 15 minutes after the representative left her house, Bell said, she received a phone call from the division stating they could not do the work for free, after all.

Carmen Miracle, city clerk and liaison for the Mayor’s Committee with Disabilities, said she forwarded Bell’s letter to Community Development Administrator Pratt Simmons and City Manager Kristoff Bauer on Monday but was unsure of how the city would address the issue.

“(Her complaint) really doesn’t apply to what this form is for,” Miracle said. “It’s really more geared toward folks complaining about accessing public businesses or buildings in community.”

For now, Bell uses a piece of particle board and a couple of two-by-fours to get her through the front door. Although the makeshift ramp helps, Bell said she has to hoist herself up over the threshold to get all the way inside.

She really isn’t supposed to be using it, but until she finds a way to acquire a proper ramp, Bell said, she will continue to use what she has.

It’s better than scooting her way up three stairs with her wheelchair in tow, she said.

“I’ve exhausted all options everywhere and have called just about everybody,” Bell said. “We (as disabled people) fight for wheelchairs and power chairs; we shouldn’t have to fight to get into our own home.”