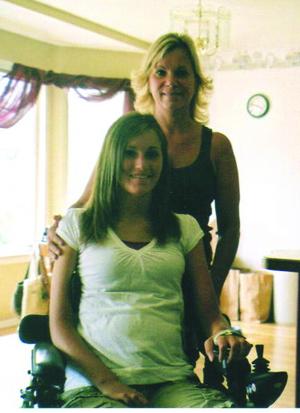 FILER – In 2006, Lindsay Heimkes joined the ranks of the more than 11,000 spinal cord injury cases that hospitals across the country see each year.

But don’t count this former high school and college athlete out of the game just yet. After hours of surgery and grueling therapy, she’s ready to get her life back on track.

When the call about her daughter came into the office, Tammy Heimkes remembers thinking the worst.

“I wouldn’t wish that feeling on anyone,” she said. “But knowing how Lindsay does everything big or go home, I knew if she was in a car accident it wouldn’t be something simple like a broken leg,”

In July 2006, Lindsay Heimkes and two other women were traveling through Wyoming on their way to Kansas City when their car rolled over on the interstate.

“We were going to a college scouting camp type of thing to play basketball,” Heimkes said in a recent interview at her Filer home. “I actually don’t remember any of the accident or how many times we rolled, but it was an over-correction twice.”

Having sustained serious injuries to her spinal cord, Heimkes was life-flighted to Wyoming Medical Center in Casper where she spent the next 21 days in intensive care. The two other women were treated for minor injuries and released.

“My spinal cord was affected neurologically at C4 where the Vertebrae burst, and I have an injury at T10 and T11,” she said. “So my spine is basically fused with a cage, screws and a lot of titanium the whole way.”

Doctors held out little hope that she would ever breathe on her own, but she has surpassed their expectations.

“They didn’t think I’d be able to draw a breath on my own, but by the time we left for Craig, I was off the respirator and didn’t have my trach,” she said.

The staff at Craig Hospital, a spinal and brain injury facility in Denver, Colo., spent more than three months assessing and pushing to develop her abilities.

Categorized as an incomplete injury, Heimkes has now regained movement in her shoulders and left arm, and is continuing to work with Physical Therapy to further improve the function of her right arm.

“When we first started I couldn’t move it at all, but now I can lift it up,” she said. “Trying to do the simplest things, like brushing your hair, teaches you how much people take for granted, but family pushing (me) and the support of friends really pulled me through this whole thing.”

The family moved to Idaho from Arlington, Minn., during Heimkes’ sophomore year in 2003. Her athleticism and competitive drive quickly became valuable assets for Filer High School’s volleyball, basketball and track and field teams.

After graduating in 2005, she put those talents to use over the next year playing basketball for the Sheridan College Generals in Sheridan, Wyo.

“I’ll probably always want to get out there and play, but that won’t happen so I might as well think of something else,” she said. “I did help coach my little brother’s rec team this summer, and they did pretty well with a third place finish, but at first it was hard trying to explain what I wanted to see.”

Before the accident Heimkes had planned to pursue a career in physical therapy, but since returning home last November that focus has changed as well. Later this month, she will attend the College of Southern Idaho with plans of going into Social Work.

“I’m a little scared because I’ll have to depend on someone to help me with testing, getting to class and out of class,” she said. “I can’t exactly do physical work but there’s nothing wrong with my brain, and I want to help people because people helped me.”