One warm summer evening, Tamara Mena-Perez lay in her bed gazing at a row of medication bottles on her dresser. 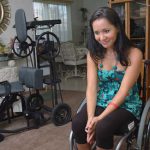 She started getting angry. It had been nearly a year after the car accident that left her paralyzed below the waist, and she was supposed to be getting better, not swallowing all these pills.

As she stared at the bottles — emblazoned with “do not drink alcohol” warnings — she had a moment of clarity; she finally understood.

Mena-Perez, 21, had been asking “Why?” for so long. Why was her longtime boyfriend, Patrick Riner, a fellow Davis High School graduate, killed in the October 2005 car crash? Why was she spared?

“I can’t explain it, but my questions were answered. I felt blessed,” Mena-Perez said. Had she walked away from the accident without a scratch, she might have turned to alcohol to grieve. But she survived for a reason.

“It all made sense,” she said. “I was protected by my condition. Things will never be the same, but does that mean it can’t be better?”

And it has gotten better. Mena-Perez has made significantstrides in her recovery in the two years since the accident, which occurred on a freeway near Rosarito, Mexico. 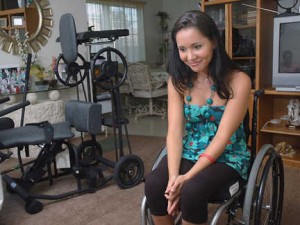 Mena-Perez, Riner and four other friends from Modesto were traveling to the Mexican beach town for a night out when the taxi driver struck a horse in the road. The impact killed the driver and Riner, and MenaPerez suffered a spinal cord injury.

The first year was difficult. She returned to live with her mother in their Modesto home, where she battled frequent infections, never going more than a week without falling ill.

Her mother, Martha Perez, said she was amazed to watch her only daughter — in bed drenched in sweat or feeling awful — answer her phone in a cheerful voice, keeping a positive attitude despite the circumstances.

“Every day she surprises me more and more,” Perez said in Spanish. “In the past two years, her achievements have been much greater than all that pain.”

Mena-Perez has returned to Mexico twice since the accident. Once was to visit the scene of the crash, which she doesn’t recall. “I was trying really hard to remember, and I hoped things would click and make sense,” she said.

She returned for a surgery in January, after a neurosurgeon in Guadalajara heard about her situation and offered his services. The surgery helped immensely, she said, along with continuing Physical Therapy.

Four days a week, she takes adaptive physical education classes at Modesto Junior College. On a recent weekday, she was lowered into a shallow pool by assistant instructor Jeremy Blaney.

Swimming helps those who use wheelchairs avoid bedsores and gets the blood flowing through their legs by moving them in the water, Blaney said as he gently pulled Mena-Perez around the pool by her feet.

In the fall, she will start taking academic classes at the campus. Getting used to college life again has been a challenge, said Mena-Perez, who had attended San Diego Mesa College. 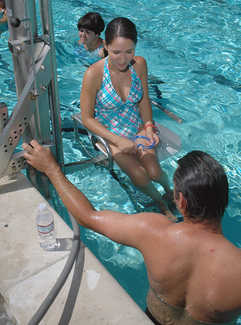 Her first day of physical education classes at MJC “was the worst,” she said. “I knew it so well, but at the same time it was all new. How do I open a door? It felt so heavy.”

After the accident, she couldn’t feel anything below her chest. Now she can sometimes feel sensation as low as her hips and thighs.

It gives her hope that the sensation will keep going lower. She wants to attend a trial week at Project Walk, an exercise-based spinal cord injury recovery center in Southern California that teaches people the skills to walk again.

Overcoming some of her emotional pain has helped her physically, she said, making her more independent and able to perform such tasks as dressing herself.

“When you are free mentally, you will find a way to do things differently,” Mena-Perez said. “God doesn’t give you more than you can’t handle.”

A benefit for Mena-Perez is set for 6 p.m. Thursday at Sidelines Pub and Grill, 2801 McHenry Ave., Modesto. Businesses will auction goods and services, with the proceeds supporting her participation in Project Walk.

By CHRISTINA SALERNO
Bee staff writer Christina Salerno can be reached at 238-4574.

Tendon Transfer Should Be Used More Often in Tetraplegia